Part I of this story can be found here.

I last left you with this image.  This is the image I saw one fateful day on eBay while perusing through random mini listings. 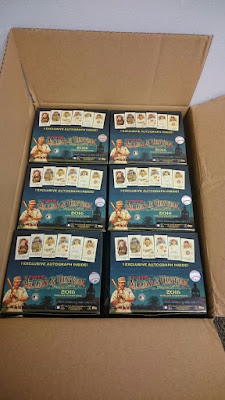 This seller was advertising a case lot of 2016 Allen & Ginter X.  He claimed that he was only interested in the autographs, ripped into each box until he pulled the auto in question and moved on.  He proceeded to do this for an entire case of the product (18 boxes).  He was selling what was left behind... his leavings, if you will.

Well, I happen to enjoy people's leavings, so I snatched this listing up at a ridiculous discount.  I paid less than 25% of retail value (less than $1 a pack!) for this listing.  To be fair, it was for good reason... the autos were pulled, and other than short prints (mini and base), there really isn't any opportunity to "chase" anything else in these boxes.  Either way, I knew I was guaranteed to come away with at least two base sets (including SP's), plus 324 minis which is pretty darn close to that 350 set build mark.

I pulled the trigger.  This is what my dining room table looked like after I unpacked the contents. 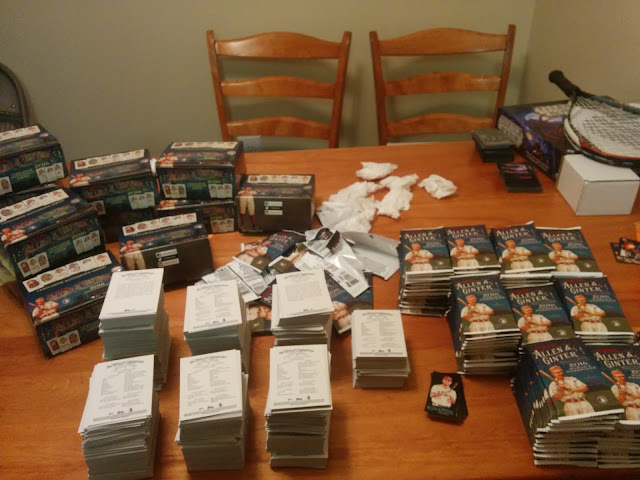 We have all the boxes I emptied on the left, the loose base from the packs this guy had already opened in the middle, and the huge piles of packs I had to now rip through on the right.

A few things I want to mention... 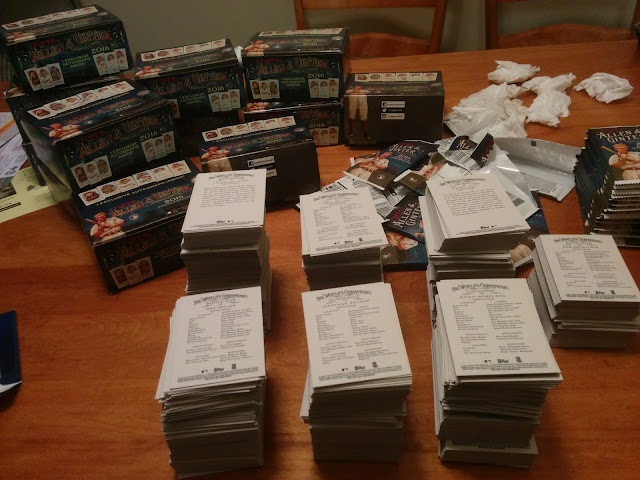 First, as was expected, the base came to me completely unsorted.  That was zero fun.  Second, as you can see from above, I cheated and opened 7 or 8 packs myself before realizing that this was probably a story worth telling.  I stopped opening packs to snap a few pictures to document this insanity. 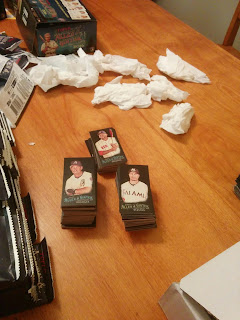 Don't worry!  I didn't forget those precious minis!  They were just hiding behind the unopened packs in the first two pictures.  These were the minis included in the package that the seller had opened.  Fortunately, they weren't damaged or picked through at all.  I received the expected number of short prints and Kyle Schwarber rookies. :p 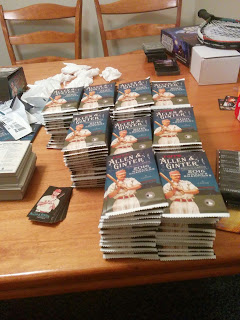 Here's a closer look at the unopened packs I had to go through.  Those are stacks of 18-20, so I had to open up just over half of the case myself.  There really wasn't any joy in it as I wasn't chasing anything.  Really more tedious than anything else. 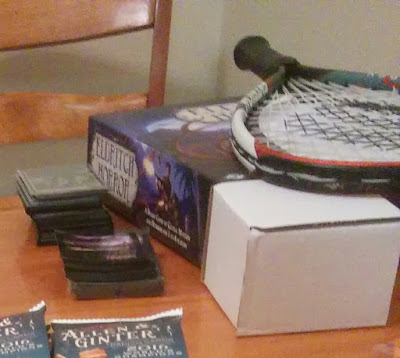 Something else in that above picture... zooming in on the top right shows what was previously occupying my dining room table.  An excellent board game, a racquetball racket, my Magic the Gathering standard deck, and a 100 ct. box filled with minis from a past trade.  A pretty good sample of my hobbies.

Anyways... back to story time. I spent a good deal of time going through and sorting the already opened cards into piles by 100's.  The packs got opened next and went alongside those 100's piles.  The next week was spent slowly knocking those piles down into sortable piles of 10's (so 230-239 would all be in one pile).  I could then finally start building sets of what I had.

When all was said and done, I ended up with two complete sets (1-350), plus two more complete sets (1-300).  I probably could've built a fifth 1-300 set, but decided that I was just going to use those all for trade packages anyways.

I also did as well as one could expect on minis.  I'm missing 44 of them to complete the set (with about half of them being SP's).  That means I ended up with only 18 doubles in the entire case.  I was pretty pleased with that.

There was one more thing though.  With about six packs remaining to open, this "card" fell into my hands. 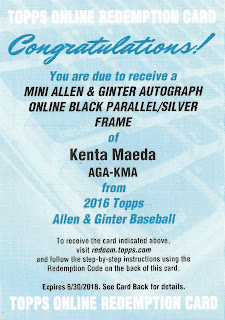 I can only assume that the box this pack came from was a hot box, or maybe the seller made an error.  I'm not sure.  Whatever the case, this was an awesome bonus towards the end of all that sorting.  As I'm writing this, I still haven't redeemed it yet, and I'm not really sure why.  Perhaps I still can't believe it.

In any case, I made out like a bandit on this transaction. 90% of a mini set plus a sweet silver ink rookie auto, not to mention all that trade bait I have lying around now.

Oh yeah, anybody want some Ginter X??? :D  I've already hooked a couple people up with teams sets, ect.  I know I'm probably one of the only bloggers that gets this product, and I certainly have more than enough to go around this year.  Feel free to yell at me, and I'll shoot some of this your way!

I just now realized that I haven't actually shown a single card of this product off between these two posts (unless you count the backs).  So for those of you who would like to know what this product is, here you go.

May your breaks be as lucky as mine!
Posted by Bubba at 6:46 PM