That Feeling of Instant Splurge

I'm not usually one to post cards I've recently acquired just for the sake of posting them and showing them off.  I usually like to have a reason to do.  Sometimes that reason is highlighting a trade package, having a theme to write about, or simply posting a good story.

Today is a bit different.  Here are some cards.  I bought them.  I didn't have them before and now I do, and I'm excited about that. 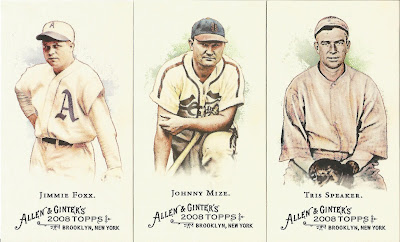 I suppose there is a bit of "theming" to all this as the vast majority of the cards have been on my want list for quite some time.  These cards are just rare enough and just old enough that most people don't have them lying around anymore.

I bought a bunch of these 2008 mini inserts off COMC, pretty much grabbing everything I didn't have that came in under $1.50.  Heck, even if I wasn't trying to collect these sets, I still might have spent the $1.50 on a few of these cards.  2008 Allen & Ginter is simply that beautiful to me. 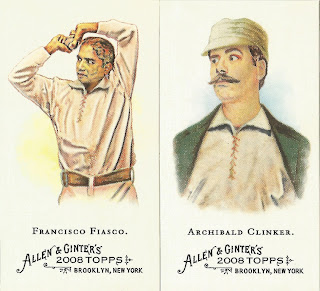 These Team Orange inserts were a bit more than than the $1.50 price-point, but they're also a bit more rare.  Happy to cross them off my want list! 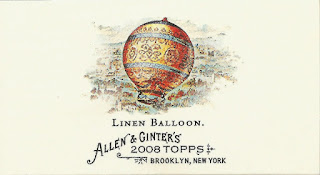 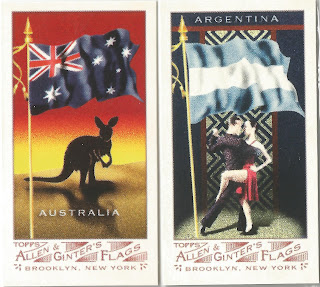 Picked up two of the three flags I need to complete this mini set from 2007.  The last card I need is that of Iceland, a wonderful country that just exceeded all sorts of expectations at EURO 2016. 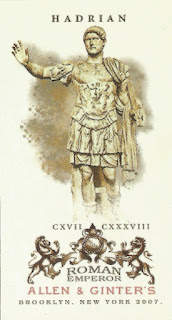 I also inched closer to this Roman Emperors set.  Hadrian was 1 of 3 remaining for me.

I didn't just limit it to rare and older Ginter.  I picked up some fairly new stuff as well.  I'm still trying to complete the 2015 purple framed relic set because... well, purple!

These six were all on the cheaper end (really, Beltre cheap???) and I needed them, so into the cart they went. 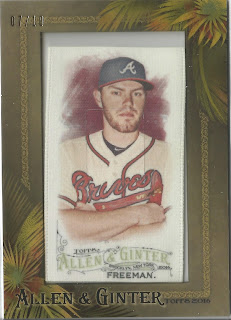 This particular purchase was more of a last-second splurge.  I really enjoy the cloth minis, and I don't have too many of them, so being able to pick up a notable Brave at a decent price seemed like a good idea. 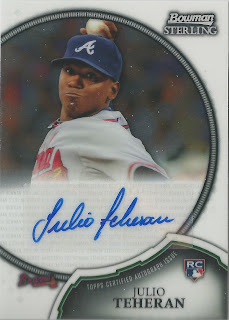 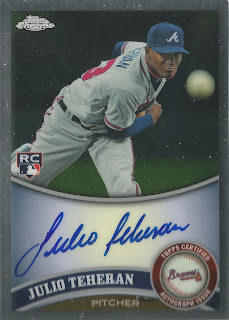 Lastly, I started my Teheran PC out with a BANG!  While I like the way this kid pitches, one of the other reasons I chose him was because of his absolutely beautiful signature.  His autos are actually surprisingly cheap (borderline bargain bin prices), which kinda astounds me.  While he's no Clayton Kershaw, he certainly is still a great pitcher with tons of possible upside. 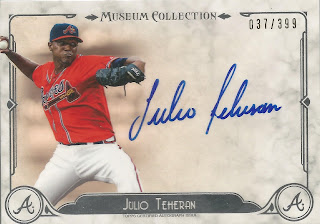 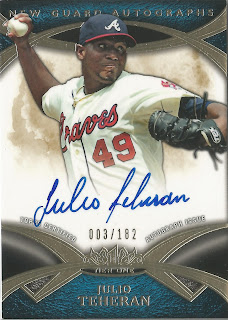 I ended up with a whole mix of autographs when all was said and done.  Some RC autos, a few on-card, some sticker-graphs, a few numbered ones. 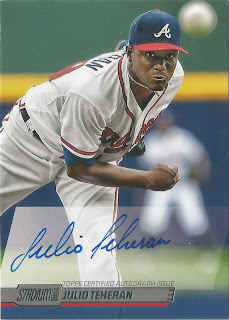 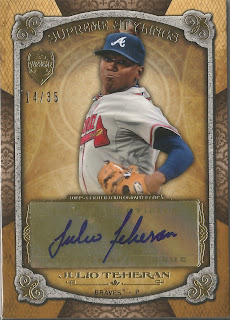 I even obtained the lovely "floating ball" Stadium Club shot.  While this one isn't the best, I've always loved a good floating ball picture.  They do tend to work better when zoomed out a bit more so the camera doesn't have to choose what it wants to focus on. 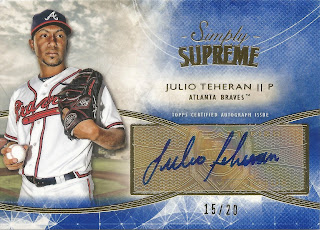 This one is probably my favorite?  Heck, they're all my favorite.  I like this one mostly because of the card design.  Someone went to town and put a whole lot of pieces together to make this card look nice, and I think they did a fabulous job.  It helps that the clouds background goes rather nicely with the blue parallel.
Posted by Bubba at 7:33 PM