I Need Your Help Being Decisive

I enjoy minis.  I strive to collect a complete set of regular back Allen & Ginter minis from every year that Topps has produced them.  So far, I have only fully completed one set, but that okay.  It gives me something to chase after.

With all this mini collecting over the years, I've accumlated a vast assortment of "unwanted" minis.  It's not that I don't like them... it's more that they don't fit in any specific collection, so they get set aside.

Today I attempt to change this!

I'm going to be putting together a Frankenset of black bordered Ginter minis with a few rules:


This idea originally started coming together after my case break from last year.  In 2014, I pulled a black bordered Bryce Harper rookie card and last year I pulled a black bordered Kris Bryant rookie card.  I figured that these cards were the definition of "iconic" (not to mention a bit pricey), so I wanted to do something with them to show them off.

I spent the past month creating a spreadsheet of Ginter checklists over the last 11 years and slowly eliminated cards until now.


Statue of Liberty vs. Steve Carlton

Will Clark vs. Orlando Cepeda

Javy Lopez vs. Jack the Ripper vs. Colin Cowherd 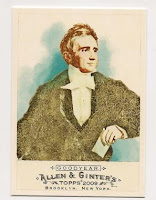 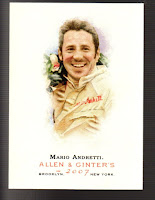 I know those aren't black minis (trying to find pictures of all the black minis would be tough), but they are the base card counterparts.  If you have any kind of opinion on the above "matchups," throw your thoughts in the comments.  I'll probably listen to you.  :)

Lastly, below is a list of Allen & Ginter card #326 throughout all 11 years of its existance.  I'm completely at a loss as to what to do with this slot.  None of these cards seem iconic to me.  So we're doing a poll... over there --->

Go vote on your favorite card #326.  I'm curious as to which subject will win.  Here's the pictures in case that sways your vote.  Thanks for your help!