A Trio of Triple Threads, Multiple Maddux, and a Smattering of Smoltz

One of my favorite reads can always be found over at A Cracked Bat, run by Tigers fan Julie. She has a knack for coming randomly out of the woodwork with a nifty, thought-provoking post about the hobby, life in general, or whatever happens to be on her mind. Her most recent post features one of the most creatively run contests I've ever seen in the blogging community. Heck, it masquerades as post without a contest at all!

The premise is that she's getting rid of extra cards of specific players and making people guess whether the cards in the giveaway are Dupes, Dumps, or Dwindles. I love it! Wonderful usage of alliteration is something we've always appreciated here at Bubba's Bangin' Batch of Baseball Bits. 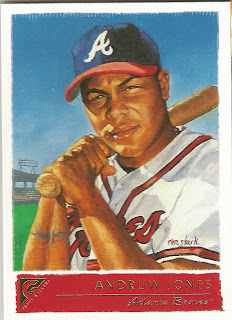 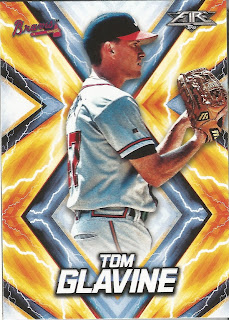 I'm not bringing up Julie just because of her recent post however. She blessed me with a package of cards a while back and I wanted to show them off.  She managed to send me base cards from four different sets that I had never seen before outside of the digital world.

2001 Topps Gallery: This Andruw Jones was the lone card I received from this set, and I kinda like it. I've always enjoyed artist's renditions and tend to like them over actual photos (outside of something like Stadium Club which attempts to capture more than just the player). It's also why I think '53 Topps would be my vintage set of choice if I were to ever go down that rabbit hole. I did notice that Topps resurrected this brand late last year in what was a retail only offering. I still don't own a single card of that set either, but I also didn't necessarily hear the best things about it.

2017 Topps Fire: I received three such base cards from Julie in this package.  I only scanned the Glavine though... mostly because I wasn't a huge fan.  They simply feel too contrived to me. I will admit that some of the inserts I've seen pop up online look intriguing. There are 'Monikers' and 'Flame Throwers' insert sets that go so completely overboard that they end up looking like 90's cards, which could be cool. The base card though... not overboard enough. 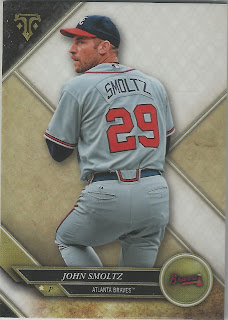 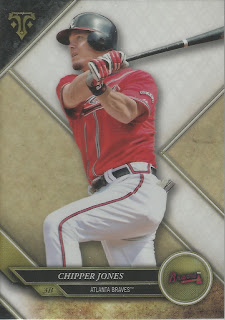 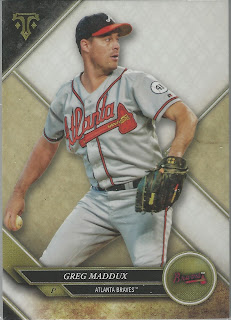 2017 Topps Triple Threads: This is the quintessential high-end base card. Not overly much to the design and EXTRA thick cards. This is how you can always tell! Maybe if you take one apart, there might be a hidden jersey swatch within. I do absolutely appreciate these, as they are three of the greatest Braves to ever play the game, and I certainly wouldn't have chased them down myself. 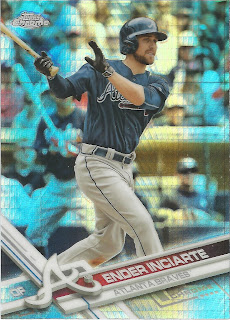 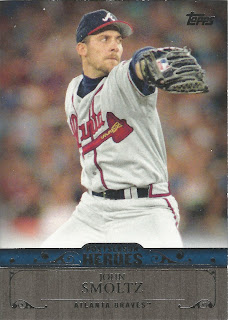 A brief pause in the action to showcase two other cards from Julie from sets I have seen before. The first is a Chrome refractor parallel of a player whose seemingly been under the radar for a while. The only veteran that came to Atlanta with Dansby Swanson and Aaron Blair in the Shelby Miller to the Diamondbacks trade, Ender Inciarte might have been the best part of the trade for the Braves. He was an All-Star last year and is a defensive plus in center field. Brian Snitker has been experimenting with the lineup recently, dropping Inciarte to 9th in the order, citing his struggles at the plate.  I'm not super worried about it though, as he's basically a career .300 hitter.

The second card is a 2013 Topps Update insert of Smoltz doing his thing on the mound. While there's not all that much to this card, I enjoy it for what it stands for. Even though Smoltz lost the famed dual with Jack Morris, his 15 postseason wins is second to Andy Pettitte on the all-time list. 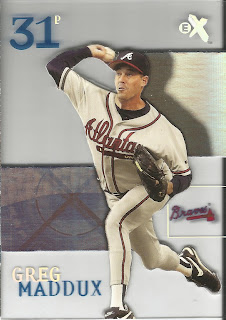 2003 Fleer-Skybox eX: This card was probably my favorite of the entire package mostly because its just so "out there". The card itself is made of acetate and is semi-transparent, but only where the player's picture is not present. The card is also quite thick, even for an acetate card, and generally feels like you have a huge hunk of plastic in your hand. Now, I'm not saying I'm going to run off and try to build this set, but getting a Maddux from this was quite the fun experience!

Thanks for the great package Julie. Looking forward to trading again soon!

Cards Delivered Just Over the Wall

Another long overdue trade post!  This one featuring Shane of Off the Wall.  In fact, Shane just recently threw up a very rare post regarding interesting 80's cards.  Go check it out if you haven't seen it.  In any case, I threw Shane some Red Sox a while back and this is what I got in return. 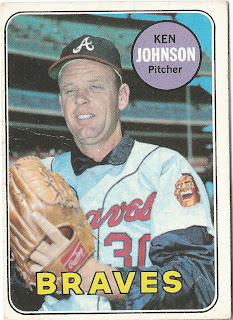 Naturally, we have to start out the post with some more miscut vintage.  As I mentioned before, I certainly don't mind getting stuff like this.  It means I know they're real and I have no intentions of ever building out these complete sets, so miscut versions are just fine! 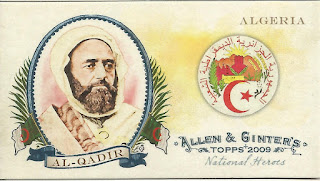 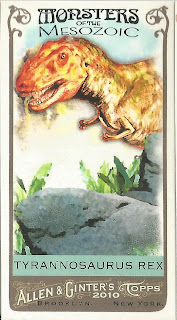 Shane came up big with some random mini needs from A&G sets between 2009-2012.  That T-Rex looks nothing like any image of a T-Rex I've ever seen... granted, nobody really knows exactly what they looked like.  I think I once heard some paleontologist suggest that these big carnivores were actually quite brightly colored, similar to a woodpecker, or other male bird. 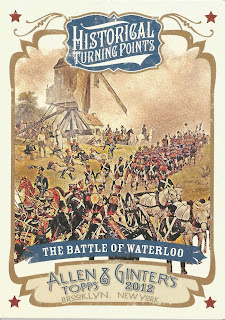 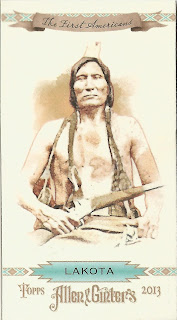 More insert needs!  As suggests from the last few posts, this trade occurred quite some time ago.  It simply was the next post in my drafts folder.  What makes it really strange is that just yesterday Shane reached out to me via my relatively inactive Twitter account and asked me about the start of another trade.  I promise this wasn't planned. 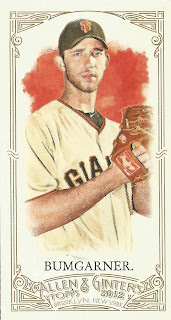 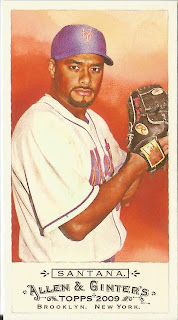 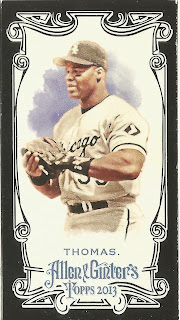 Some base mini needs were included in the package as well.  I picked out the two best pitchers in the lot to showcase.  Shane also included a black mini of Frank Thomas for my frankenset which is slowly making progress! 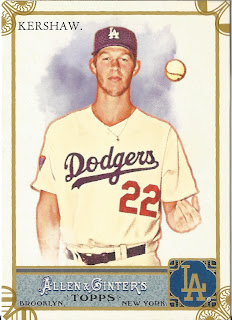 From two great pitchers, to possibly the best of the modern baseball era.  I'm certainly not anywhere close to completing this parallel code-card set, but this was certainly a big one to cross off the list. 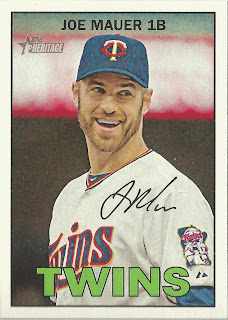 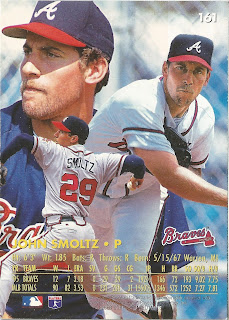