Peter over at Baseball Every Night just had his one-year anniversary the other day and he asked people to write a post about their favorite card of their favorite player.  I have a problem though... I kinda just did that two weeks ago.

I thought about moving on to Julio Teheran and showcasing my favorite card of the younger Braves ace, but the truth is that Smoltzy will always be my favorite player to watch and remember.  That means you get to see this glorious card again! 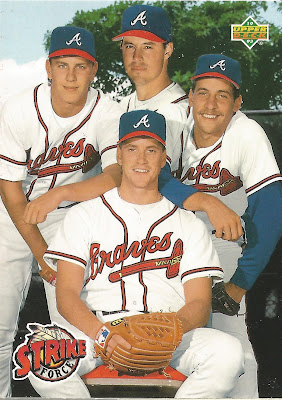 You can read all about how and when I acquired it from that post two weeks ago (and how John sent me an upgrade!).  I suppose to avoid this post being a complete cop-out, I'll throw up one of my favorite cards of another former Brave pitcher featured in the above card. 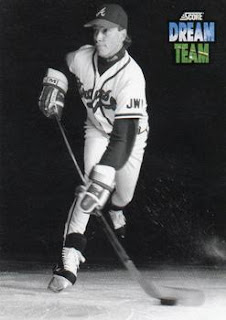 Would you really expect anything else?  ...and I'm not even a big hockey fan.

Congrats on the first year Peter!
Posted by Bubba at 7:07 AM 2 comments: 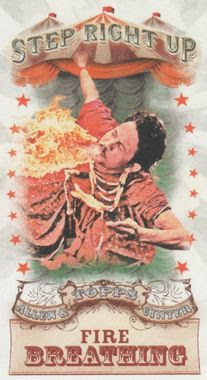 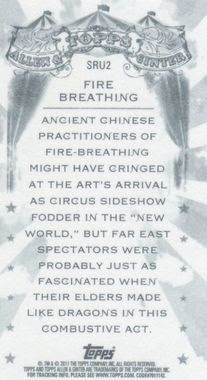 Heads and shoulders above every other card in this set, this fire breathing card stands out because you can see what is going on and the picture covers most of the ugly green background.  Also, fire breathing happens to be one of the few things that actually catches my attention and piques my interest at a circus.

Notes and Comments:
Upon writing up this post, I am actually somewhat regretting the rating I'm giving this set.  Looking at some of the scans really makes me appreciate the detailed work that was put into this set.  The card backs here are what really stand out to me with the blurb being framed by a curtain 'opening the show'.

I went back over to my binder and pulled out a couple more cards and instantly hated them again.  I think these cards are a rare breed that actually scan better than they appear in hand.  The cards are just so darn busy in hand that I can't even tell what's going on in half the pictures. 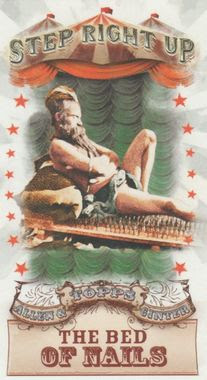 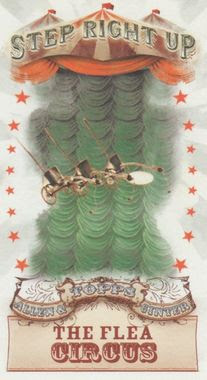 I don't know... I just don't like them.  The green background seems too much, and the card subjects floating in mid-air don't really work for me.  While the framing seems excellent in these scans (and it really is), it leaves little room for anything else on the card, so the whole thing feels cramped.  I think the set would've been quite successful on a standard sized card stock, but as a mini, I feel it fell flat.

If I had to rate it again, I'd probably bump it up a little bit, but I'm going to stick with my original guns, making it the second worst mini insert set that Ginter has ever given us.

Arbitrary Rating (out of 100): 39
Click link above for complete up-to-date ratings

A Trip to Citi Field

I awoke Thursday morning at 4:00 AM somewhat doubtful.  I looked out the window expecting to see snow on the ground, branches broken off trees because of high wind, or some other natural disaster wreaking havoc on my apartment complex.  Instead, I simply saw darkness... I forgot, it was in fact 4:00 AM and I couldn't see a damn thing outside.

I went over to my phone, shut off the alarm, and brought up the weather page again hoping that Joe Fury had changed his mind about what dastardly storm was going to come up on us that evening.  He hadn't.  Still rain and lots of it until the late evening.  I trudged into work not a very happy camper.

Typically, when I have to wake up at the ungodly hour of 4:00 AM it means that I'm in to work at 5:00 AM and am essentially there to make sure everything is working as intended and to prep for the day.  No one else usually comes in until 9:00 AM, so I get 4 hours alone... which is super good for me as I work much better without anyone bothering me.  However, Thursday happened to be the first day of the Master's Tournament, which everyone makes a huge fuss about because it's on our air, so I was joined by many the coworker by 6:00 AM.

This put me in even a worse mood, for no other reason than I simply had work to do.

I was supposed to be leaving work, picking up my girlfriend, and heading to New York to catch the Mets and the Braves.  I checked Joe Fury's page again: "Gale Warning: Expect high winds with 1 to 2 inches of rain throughout the afternoon."  Blah.  I went to look up alternative ideas for the evening and came up with (what I thought was) a pretty good one.  Start the drive to New York and if the game is cancelled stop at a brewery in Stratford, CT called Two Roads and poke around there for the evening. 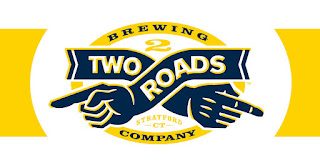 Around 2:00 PM I got out of work and started the trek down to Queens.  The drive was a nightmare.  If you've ever driven around the New York metropolitan area, you'll know the roads are terrible mostly because there's never a good time to work on them (they're always busy).  Driving those roads after 2 inches of rain was... interesting?  I now know that I take highway storm drains for granted.  The old New York thruways are properly crowned to assist in the drainage of water however, there exist no actual storm drains because the roads are so narrow.

The drive that ensued was straight out of Looney Tunes.  There was so much water built up in the medians that one could really not effectively drive in the left-most lane.  The center lane was used for most of the travel, but because it was slow, there were inevitably dare-devil cars and trucks that decided the left lane would be faster.  When they did this, there was so much sitting water that it would spray up and over the median into oncoming traffic.  One of the most dangerous driving situations I've ever been apart of. 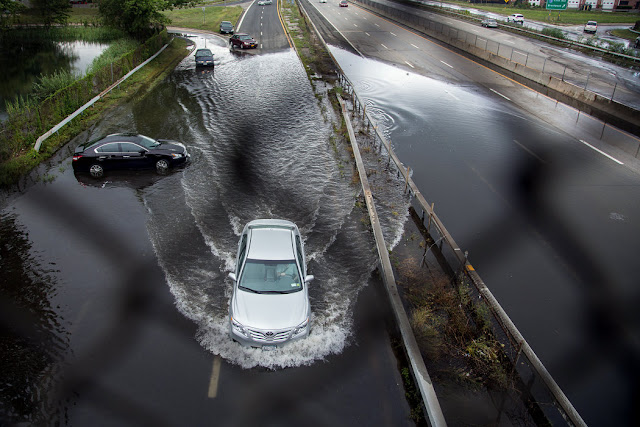 This an example of the highway we were on.  While the water wasn't this high, this shows you how close the "divided" highways actually are... and no storm drains.

During the drive, we were monitoring Twitter to make sure the game hadn't been cancelled.  We got to Citi Field around 5:00 PM just as the rain started to let up.  We walked around the stadium for a bit and headed towards our seats on the 3rd base line.  We were pretty early (hoping to catch some BP) so we were able to get right up on the railing and watch the grounds crew do their thing.  Almost no players were on the field up until right before first pitch (I have no idea how they warmed up).

The only player we did see was doing a walk-around probably coming from a bullpen session.  He stopped by the third base line where we were standing and signed some autographs and took some pictures.  I was absolutely thrilled to get one with him. 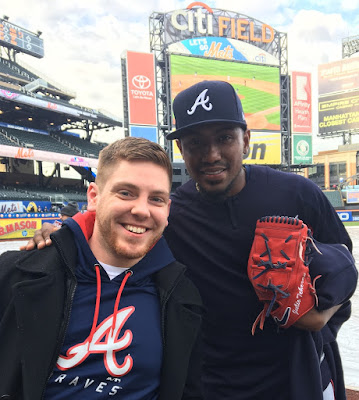 This instantly became my favorite baseball game I've ever attended... and the game hadn't even started yet.  The game itself was actually well worth attending.  We got to see Kemp hit two bombs, and some pretty good pitching on both sides.

Dansby Swanson was by far the most disappointing part of the game.  Not only was he far too arrogant for not doing all that much in the bigs yet, but he also was flat out awful.  As a shortstop, he gave up on two balls that were certainly within a typical fielder's range, and made a real bad throwing error on a routine double play ball that directly led to a run.  He also came up in the 8th with the bases loaded and Braves mounting a comeback, and proceeded to strike out.  Not good... not good at all. 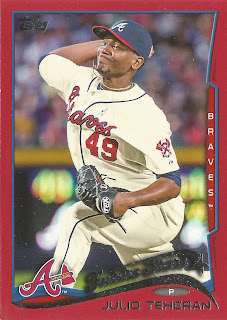 Even with the Braves losing, the moment I had with Julio Teheran made my day (and possibly my year).  Here's some more recent pick-ups that I've grabbed of the Braves ace. 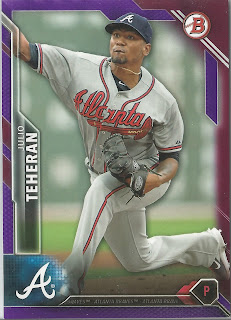 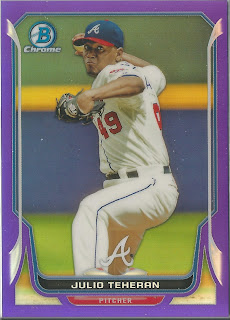 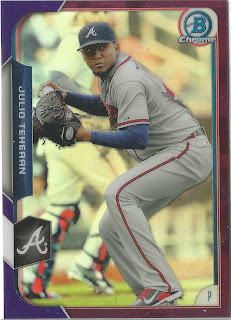 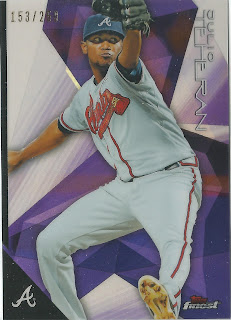 Naturally, the vast majority are purple.
Posted by Bubba at 6:55 PM 3 comments: