A long while back, Gavin of Baseball Card Breakdown sent me a great trade package that I highlighted here.  In the post I mentioned that there was a card I would talk about later.  Today is the later date I chose.  That's because yesterday the Missoula Osprey ended their season with a 5-8 loss to the Great Falls Voyagers in the semifinals of the Pioneer League playoffs.

This single remaining card was one of Gavin's famed customs and featured a very special Missoula Osprey.  My cousin: Gavin Stupienski. 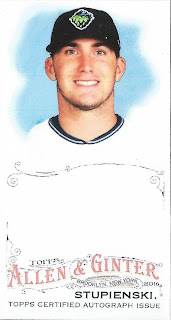 Gavin had posted about a number of new players also named Gavin that had been drafted and I reached out to him letting him know that I could probably get my cousin to send him something.  Well, Gavin (of the Baseball Card Breakdown variety) took it a step further and made a full blown custom of Mr. Stupienski.  Above is how the card originally came packaged featuring Gavin playing for the Hillsboro Hops (a team he's ironically only played one game for).

My task was to send these out and get them signed.  Extras were graciously included which I know were sent around the family and were greatly enjoyed.  I got one back too, signed in unique purple ink! 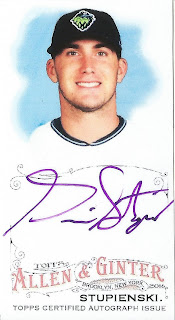 Gavin didn't get a whole lot of playing time until the end of the season this year as he was a bit pigeon-holed behind Andy Yerzy (a second round draft pick from Canada).  Gavin's strength has always been his bat, and I'm proud to say that when he did get in towards the end of the year he did pretty well for himself sporting a .359/.409/.590 slash line as a DH/C.

I haven't talked to him since around mid-season so I'm not currently aware of what his plans are for the fall/winter season, but I wish him the best in his grind.  I know he's a hard worker and I truly hope he succeeds!  Thanks again Gavin for making these awesome customs.  I know you made both his and my day!
Posted by Bubba at 2:21 PM 1 comment:

This one is REALLY old... so old that the blogger that sent me these hasn't posted since March.  Not entirely sure what has been going on with Adam from Addiction As Therapy, but he sent me the below cards earlier this year.  Let's go through them! 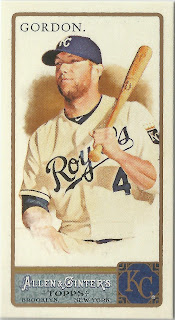 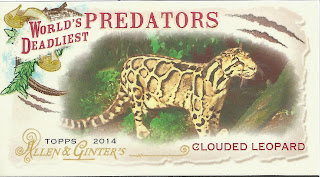 We'll start with a handful of set needs that Adam sent me.  2011 minis still have a long way to go for me... I have far too many of the inserts and far too few of the actual base minis.  Adam brought me ever so slightly closer which I greatly appreciate.

While I didn't really make any official blog resolutions this year, one of the things I told myself was that I was going to work hard on my A&G insert set review series.  I haven't.  I've worked very not hard on it.  Regardless, this World's Deadliest Predators set from 2014 remains one of my favorites that Ginter has ever produced. 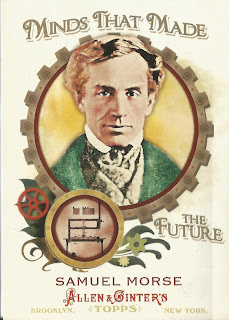 Another fun insert!  This 2011 set featured visionaries and scientists mostly from the Industrial and Progressive Eras.  Samuel Morse invented... what else, the Morse Code, and this card (and the entire set in general) focuses and features the inventor rather than the invention.  I enjoy this little cap tip as I don't think we necessarily highlight these people as much as we should, though I suppose most of these guys did get their inventions named after them. 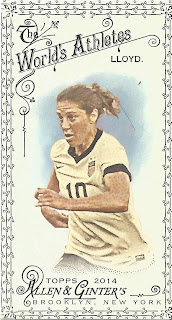 Adam sent me a single black mini parallel for my frankenset build.  One of the greatest women's soccer players ever to play the game instantly graces the binder.  Unfortunately, the USMNT got slaughtered at Red Bull Arena last night by Costa Rica in a World Cup Qualifying match.  With three matches to go, the US really needs to get a result in Honduras on Tuesday to not go into panic mode for the last round of the Hex in early October. 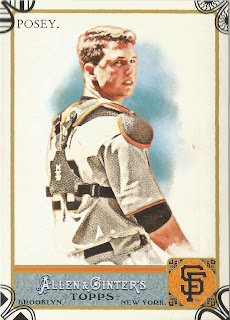 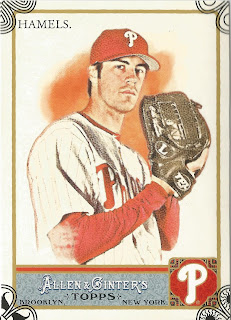 These are pretty cool.  2011 base code card parallels.  These came roughly four to a box and spanned the entire 350 set.  Over the years, I've met a number of people who have been sitting on a handful of these parallels with no real idea of what to do with them.  I've picked them up and have been slowly making my way towards building this set.  It's a slow, but fun process and Adam had 10 of these to contribute.  Here are my two favorites from the lot.  Apparently, the flower patterns line up with other cards to produce a message that was unrelated to actually breaking the Ginter Code for that year.  Red Herring! 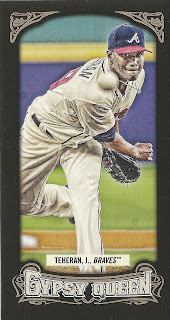 The final card in this package was a PC addition.  A Gypsy Queen black mini parallel of Julio numbered out of 199, complete with floating ball in air!  I've never really been a huge fan of Gypsy Queen, but this card is pretty sharp looking.  Then again, most black bordered cards are pretty sharp.  Many delayed thanks to Adam for this package!
Posted by Bubba at 8:08 AM 1 comment: