Set: 2015 Allen & Ginter Menagerie of the Mind
Total Cards: 20
Stated Odds: 1:2 (along with other full-sized inserts)

We're down to our last 2015 Allen & Ginter full-sized insert, and I just now realized that I haven't mentioned pack odds for these sets yet.  Shame on me.  This is one of the main reasons I started this series!  But I'm not out of time yet!

Topps did something in 2015 Allen & Ginter that kinda makes sense and that I discovered when I opened my case this year.  After sorting out all the cards I had opened, I looked at my full-sized inserts piles and found that some piles were VERY much taller than others.  When I dove deeper in, I found that I had acquired two complete sets of almost every full-sized insert.  This was not something I was used to.  I remember in 2013 when I broke a case and came away with 6 identical Martial Masteries cards, but failed to complete even a single set of Civilizations of Ages Past.

This year (or should I say last year because its 2016 now and I'm slow at posting), Topps made it so that insert set size adjusted the odds of pulling that particular insert.  Pulling one of these Menagerie of the Mind cards twice as common as pulling a What Once Was Believed card.  Topps didn't explicitly state this anywhere (as all full-sized inserts were still listed at 1:2 odds), but trust me, my odds are right.  We've got 2 sets with 20 cards at 1:7 odds and 3 with 10 cards at 1:14 odds.  If we add those odds together we get 7:14 which perfectly aligns with Topps' claim.

Aside from the numbers giving me something interesting to think about, I don't really know how much I like this new approach.  I enjoy a sense of rarity and the difficulties associated with chasing after sets.  Although, I suppose the mini sets in Allen & Ginter are difficult enough to complete, so I'm going to say that I think I appreciate this change.

On with the countdown! 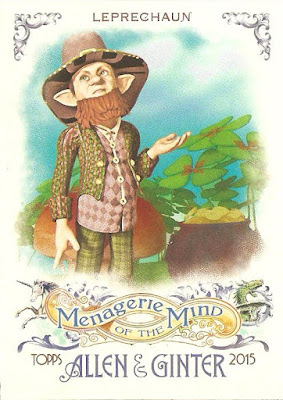 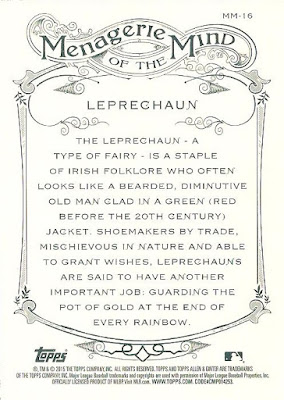 There is only one reason that this is my favorite card in this set:


Throughout my college experience, I have been called many things.  My nicknames vary from puns based on my last name, different ways to say Matt, and names I've received while playing sports (namely Bubba).  I've also acquired another "name"... though it's not so much a name as it is a testimate to my personality, height, and hair-color.  Many people relate me to these wonderful Irish creatures (though I have almost zero Irish blood in my body).  I choose to view the name as a compliment for my ability to always see the bright side of life.

In any case, whenever I see a leprechaun, I am always reminded of college and the great experiences associated with it.  This card also features one of the best pieces of art in the set and pretty accurately depicts what I would think a leprechaun would look like... and no, it is not a photo of me.

This giant set of 30 cards all feature imaginary creatures of mythology, or else of someone's crazy imagination (zombies... where the heck are they originated from???  The only thing I could come up with would be some kind of offshoot of the Egyptian mummy... but then, why isn't that in this set).
As good as the leprechaun picture is, many of the rest don't hold a candle to it.  I would venture to guess that only about a third of the art from this set is worthy of a collectible card.  I suppose that's better than most of the other 2015 full-sized inserts though.

The card backs from this set happen to be one of the better card backs of the year.  I think they are masterfully designed with a nice big emphasis on the title that happens to have some clever alliteration.  Speaking of the title, I could've sworn menagerie meant something along the lines of a large group of animals.  Similar to a zoo... but more like a giant pet store.  You know, those pet stores you walk into and it stinks like wet dog and hamster feces... and the walls are lined with animal cages containing specimens begging to be released.  Menagerie.  I don't want any of those Menageries of the Mind thank you very much.

Similar to the Ancient Armories set that I reviewed back in January (ugg... I really need to start getting in gear here), I think I'm probably significantly under-rating this set.  Perhaps not to the extent of the Ancient Armories set, but I still think it's probably going to end up being one of the sets I look back at and say... "eh, that wasn't all that bad."

Arbitrary Rating (out of 100): 52
Click link above for complete up-to-date ratings

My Thoughts on Topps Flagship

These last few days my Blogger dashboard has been inundated with posts regarding Series 1 of the new Topps Flagship set.  For good reason too.  Not only is this the first major set of cards we've seen in months, but its the signal of the start of a new year in baseball!  Pitchers and catchers week is right around the corner, college baseball is starting to play some scrimmages down in the warmer part of the world, and heck, we've even got some minor leaguers hittin' home runs in the Caribbean World Series (or Serie del Caribe if you prefer).

Well, I'm not joining the flagship hype train.  It's not because I don't like the set... actually, I really have no idea what I think about this set as of yet.  Obviously I've seen all the cards that people have posted pictures and scans of, but I haven't gone out and grabbed any off the shelf yet.  No, the real reason I haven't gotten overly excited about this release is that I simply prefer not to collect Topps flagship sets.

I'm a set collector above all things.  Nothing annoys me more than spending time and money on collecting a set and then later seeing the set released as a factory set sealed and pristine.  For me to want and collect something, not only does it have to catch my eye, but it has to be "worth it."  I want to end up with a finished product that looks good while also being something that not every collector can say they have (or can go to their LCS and pick it up for 50-60 bucks).

Two years ago a card collecting friend of mine started opening 2014 Panini Donruss.  He loved the Diamond Kings inserts of the past and the ones they put out in that set as well.  I don't remember how many boxes he opened of the product, but he ended up chasing the set (which had some obnoxious SP's in it as well) only to find out that Panini ended up releasing a factory set for the product.  He was extremely upset because he felt he wasted a whole lot of time and money on a set that is now available for $29.99.

In a way, I feel the same about Topps Flagship.  The set's existence doesn't bother me, I just have little desire to collect it.  It also helps that very few of the insert sets they produce for these sets tend to strike my fancy.

In recent years, I've actually tried to collect the Topps Chrome set instead.  Yes, I know it doesn't include all the cards, and yes, it usually leaves out a few that I would REALLY enjoy having, but I think this is a good compromise.  I get to chase a set that's harder to complete than flagship, while still (basically) getting to collect the set design!

All of this leads me to a recent, relatively smaller, trade I made with Jimmy of Talking [S]Mack Cards.  He sent me a conglomeration of cards off my wantlist from 2014 and 2015.  There was a lot of Chrome-y shinny stuff included which made me happy.  Here's a couple of the better ones. 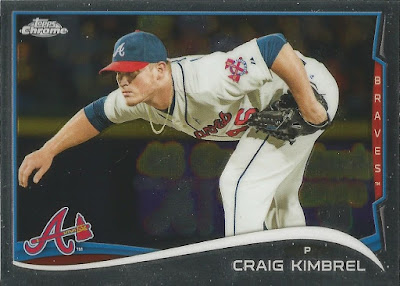 2014 Chrome.  I'd be surprised if I owned more than 30 of the non-Chrome version of this product.  I wasn't overly impressed with it, and I was completely burned out from chasing 2013 flagship (along with the vast majority of its inserts).  I think I bought a couple Wal-Mart packs of 2014 Series 1 and then called it quits.  Chrome I did collect though, and I'm getting there!  The wantlist has gotten pretty short! 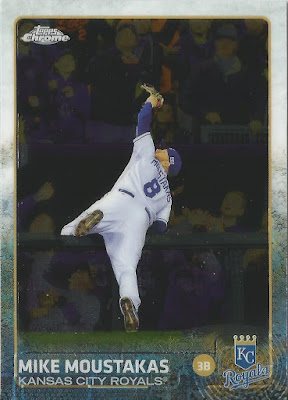 I did end up breaking down and buying a bit more 2015 flagship this past year simply because the set was so much fun.  I still don't plan on collecting the whole thing, but I have a healthy stack of those sitting around in boxes.  Ironically, I think that making this set shinny didn't actually do anything good for it.  In fact, it might have made it worse in a way with the glare the Chrome provides.  Doesn't matter.  Still collecting this.  Reason: no factory set. 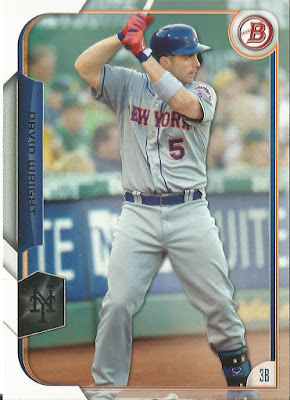 Lastly, Jimmy sent me a bunch of this past year's Bowman set... a set that I think is vastly underrated.  I don't do Bowman every year, but I usually get a hobby box of it for prospects and then decide if I want to spend more money on it.  This past year, the answer was a resounding "yes."  Bowman's presentation is usually quite awful, but I happened to really like this idea of having a pseudo-full bleed look with creative borders.

It's usually Bowman that fills the void for me between Opening Day and Allen & Ginter.  Every now and then something else cool catches my eye and I end up chasing that instead (last year Stadium Club was too close to Ginter for me to spend money on both...).  We shall see what that set will be this year.  I'm already committing myself to Ginter and Topps Chrome again.  One more will probably sneak in!
Posted by Bubba at 6:14 PM 2 comments: