So before I go and spend the week opening Allen & Ginter (and yes, I found some retail yesterday evening at Target which made me incredibly happy), I promised I'd get to the second half of what Greg sent me of the "vintage" variety.  Even before we go there, I realized I scanned a card for my previous post from this trade and I didn't actually include it.  Here it is! 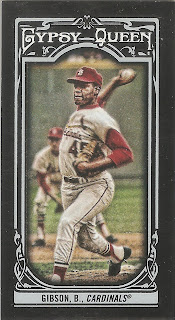 Not that I'm a huge fan of Gypsy Queen, but I'm still a sucker for minis and I love great pitching, so this card is still right up my alley.

Now that we've got that out of the way, on to the promised other cards.  I would like to make a huge disclaimer before I start spouting off about these cards.  I know absolutely nothing about vintage, so basically everything I say will probably be wrong.  Up until last week, I think I owned a grand total of one card older than 1986, and that card I pulled last year out of a 2014 Allen & Ginter hobby box (a A&G original).  All that being said, I'm not exactly opposed to vintage... I'm just of the younger variety of collectors and haven't really had access to it.  Plus, I love set collecting, and the idea of trying to collect fairly big sets from the 50's, 60's, and 70's where single cards can get pretty pricey just feels incredibly daunting to me. 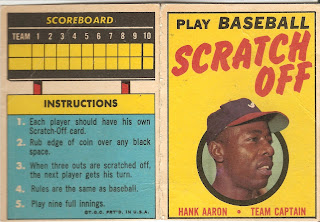 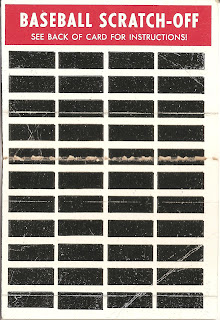 A quick bit of research shows this to be a 1970 Topps Play Baseball Scratch Off card (...and only of one of the best players to ever play the game).  I've never seen anything like this before and I have absolutely no clue where it came from.  A giveaway??? Contained in a program???  I'm sure someone will know and proceed to enlighten me.  I'm also sure the answer will adequately explain why it is necessary that the card be serrated and folded down the middle.  I suppose that this was done so that people couldn't scratch off the black without buying the card.  Perhaps they were sold individually?

In any case, I was impressed that none of the black is scratched off at all.  It makes me want to know what's under the black. 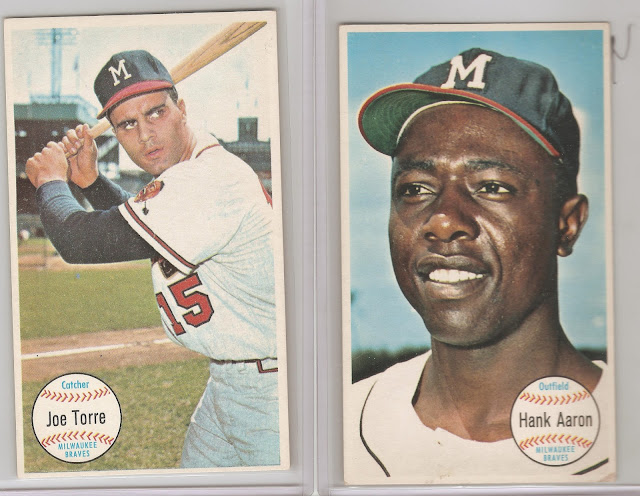 The first Hank Aaron is pretty beat up with plenty of creases across it.  In contrast, these four beauties are in excellent condition for how old and big they are.  Don't worry, the black scribbles on a couple of them are just on the outside of the penny sleeve, not the card.  More research showed these to be 1964 Topps Giant cards.  Pretty cool!

The cards are definitely oversized... probably slightly bigger than two regular cards side-by-side.  This size just augments the fact that the pictures used are stunning.  The card backs are also really fun.  There aren't any stats on them.  Instead, the backs feature a newspaper article-like design that tells a bit of a story along with highlight some achievements.  Here.  I show you. 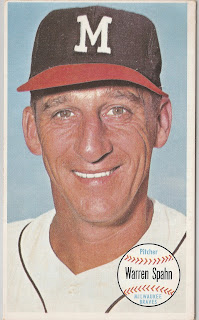 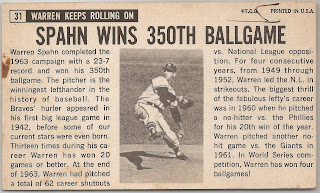 Also, I can't imagine the 3 cards above not being the entire Braves team set since the set was only 60 cards, so that makes the set builder side of me extremely happy.  We weren't done though!  Greg sent me one more card from the same set. 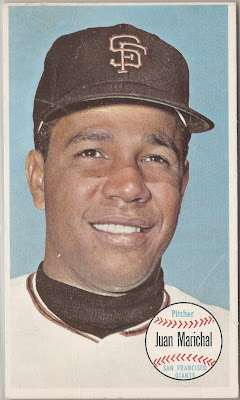 Another incredible and timeless pitcher!  Storage for these cards might be a bit of an issue.  Greg was good enough to send these in toploaders that properly fit the cards, so that helps a lot, but they're still pretty big.  I'll definitely have to find a place though, as these aren't leaving my collection!

Thanks so much for the trade Greg!  I hope you liked what you got as much as I loved what you sent me!