Let's jump right in and start talking base cards.  As many of you probably know by this point, Topps did not seem to short print base cards this year.  What I found interesting was that the cards numbered 301-350 (those that used to be the SP) still showed up in their expected position in each pack, right behind the mini.  I did not find a single card numbered 301 or higher in any other position in the pack.  This seems strange to me and points to either Ginter Code shenanigans or Topps' intent to keep short prints around, but then messing up.  I don't know which seems more likely to me. 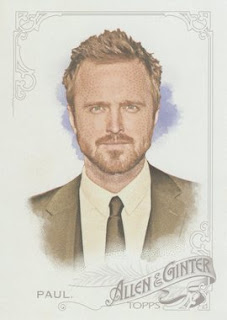 I didn't pull his auto :( maybe in the Gint-a-cuffs box!

Either way, it made me quite happy because, instead of receiving enough SP's to make 2.5 complete sets (144 is the usual count), I received far more.  I didn't bother to count the exact number, but I know I was able to put together FOUR complete base sets.  Hooray for great collation!  Certainly, there were cards I got far more than four of (I got 7 Kris Bryant's :D), but I would say that the mode (most common occurrence) of the quantity of any given card was probably 4.  As far as where these base sets are going... well, I'm keeping one and I'm going to assume I'm going to be shipping one out for this contest ending tonight.  The other two are up for grabs.  Most likely one of them will be broken down so I'm able to trade singles away more easily, but if someone has a hankering for an entire base set and doesn't feel like piecing it together over time feel free to hit me up! 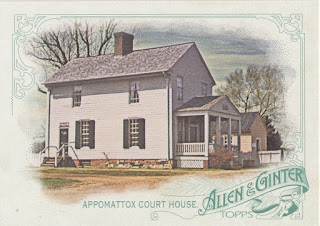 This or the Fall of the Berlin Wall is probably my favorite base card of the year.

The only other set we're going over today is these Starting Point cards.  First, I like them a lot.  Easily the best Allen & Ginter baseball themed insert set since 2009's National Pride... and it might even be better than that, I have to sit on it for a bit to decide.  I love that the players are featured on a team that you don't usually associate them with.  I actually haven't gotten a chance to sit down and really look at this set yet, but I'm wondering what Topps did for photography.  How many of these photos have already been used in years past (granted, in most cases, we're talking many years past, but reusing photos is something Ginter is commonly accused of). 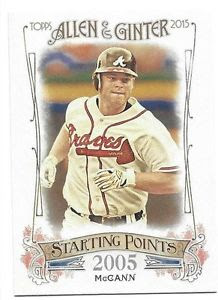 One other thing I noticed about this set is something you probably wouldn't be able to notice until you've come very close to completing the set.  Since the set is numbered with actual numbers instead of player initials (HALLELUJAH!), Topps was free to throw this set in any order they so chose.  They decided to order it alphabetically by current team, so former Brave Jason Heyward is towards the bottom of the checklist because he is currently on the St. Louis Cardinals.  It's funny because I had already put this set into a binder and was thumbing through it when I noticed this ordering process.  Felix Hernandez happens to be one of my favorite non-Brave players and I actively went and tried to find his card.  I turned toward the back to Seattle and didn't see it.  I was wondering if I made a mistake or missed a card while sorting through the set.  Did he secretly come up with a different team that I wasn't aware of???  Nope.  Topps is just weird.  Felix seems to be the only exception to this rule (unless you count some of the more recent trades), and is card #1 of this set.  I don't get it.  More Ginter Code nonsense... 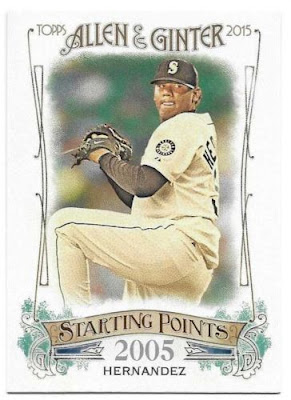 More importantly, this case did yield exactly 144 Starting Point cards and one full, complete set.  The collation was just out-of-this-world good this year.  Almost too good.  I kinda enjoy chasing after rando common inserts.  As you'll see tomorrow, I don't need a single full sized card for this year's set.  I guess I shouldn't complain!
Posted by Bubba at 8:16 AM