I promise!  Last soccer related post for a while for all of you baseball purists out there!

I feel like I have to write something about this recent pickup though, so here goes.  As you know, I've recently been scavenging around for a soccer set that's worthy of a chase and it's eluded me thus far.  The Topps Premier League Gold series has been too high-end to chase, Donruss doesn't feature anyone from the Premier League, and Topps Stadium Club, while great, isn't a chase (it was simply one box and done).

I noticed that Topps restructured their Premier League Gold product for this year to make it less high end and I was definitely intrigued... 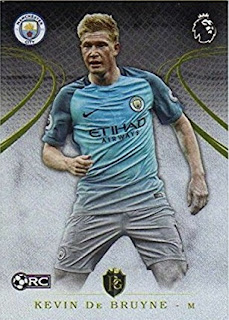 ...and I can't say I'm overly thrilled with the design.  It's simply not a base set that I'd look to collect.

However, while perusing through the set, I happened upon one of the insert sets that I think is beautiful.  I decided that I would simply purchase the set outright instead of grabbing a box and only getting one of the cards. 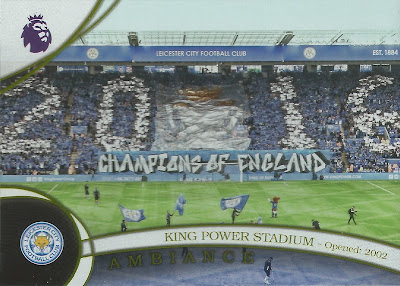 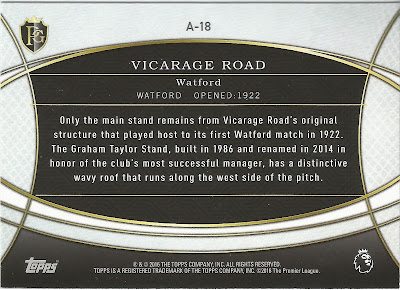 Front and back... yes, two different cards.  The set is called "Ambiance" if you can't read it from the scan and it features stadium scenes from all 20 current Premier League teams.  The combination of English soccer fans being who the are... 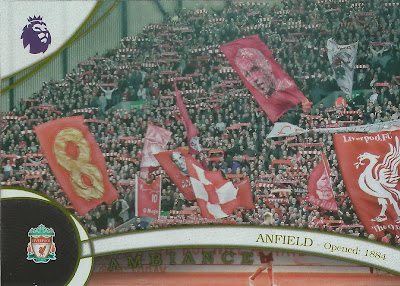 ...and the sheer history of some of these venues... 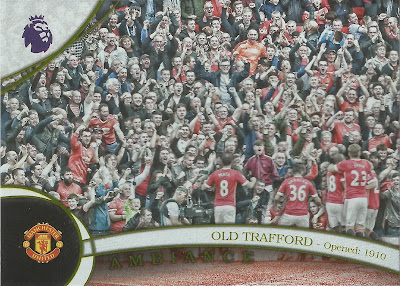 makes this set awesome.  I actually wish Topps would do something similar to this for baseball stadiums (with the same level of photography).

Here are the four cards from the set that really stood out. 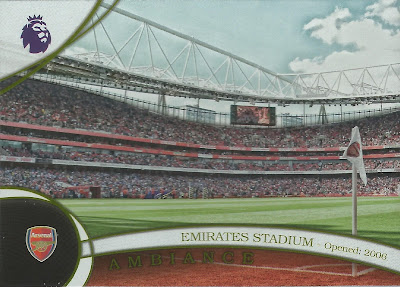 One of the newer Premier League stadiums, Arsenal's Emirates Stadium showcases modern construction technology at its finest.  The stadium was built to house fans... lots of them, and is still England's 3rd biggest stadium (Wembley, Old Trafford).

This panorama of the stadium shows off the masterful design even more, with the trusses covering the vast majority of the fan seating, but still leaving the pitch open to the elements. 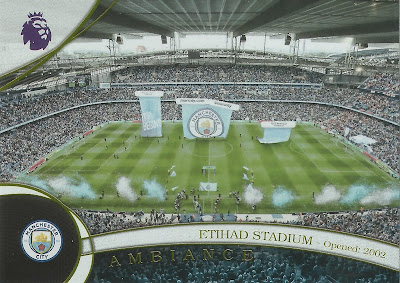 Obviously I have to get my favorite team's stadium in here.  Another newer gigantic stadium with a pretty cool display of the colors.  I'm struggling a bit to figure out exactly how they got this particular shot because I'm fairly certain they don't have a retractable roof, and similar to Arsenal, their pitch is open to the weather. 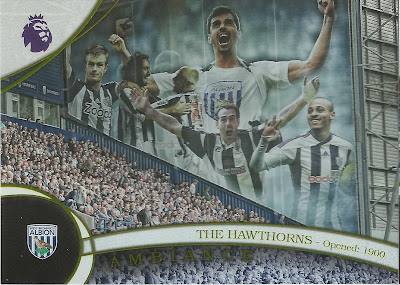 I threw this shot in here simply because I like it.  It appears that West Brom covered their normal side facing facade with a giant poster of sorts and it makes for an awesome shot.  The Baggies are having their historically best season ever, currently sitting 8th in the table and needing only 9 points to surpass their best PL finish (2012-13, 49 points). 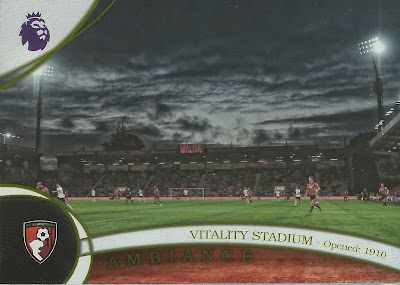 My favorite shot of the entire sets features a traditional old English, open air venue under the lights.  Simply stunning.

I picked up this 20-card set off of EBay for $30 shipped, which seems like a lot but these are seeded 1 per box so you'd have to buy 3 cases of the product to even think about completing this.  I'm very happy with the pickup.