First and foremost the scoring line from last night:

Aroldis Chapmin "closed" it out for the Cubbies last night and they took home the win 8-1.  11 total hits means our winner is #20 in the list:

I unfortunately do not have your contact information, nor can I really seem to find a way to get it.  So if you could reach out to me, we can get you hooked up with some Ginter!

On to the Ginter that I opened!

Today we're only going to cover 9 cards, but they are a fun group of 9 cards for me.  I probably will only end up keeping two of them, as I don't have much interest in the other subjects and I certainly don't collect these sets.

We're, of course, speaking of mini parallels (namely the rare ones)!

For this post I'm skipping over the first three types of minis.  I pulled a bunch of them... featuring a variety of players. 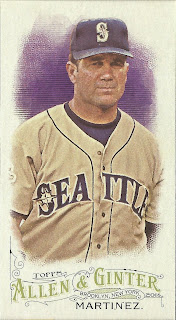 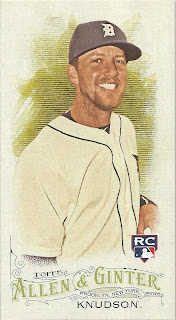 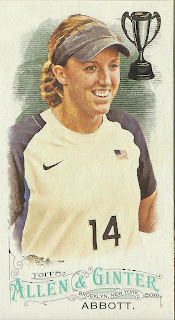 Alright, I'm done.  Anywho, these used to be hand-numbered to 50 and I figure Topps got lazy because they aren't anymore, yet folks are still fairly certain that there are approximately 50 of each of these floating around in the product still.

None of the above names are overly special, but this below one is kinda fun! 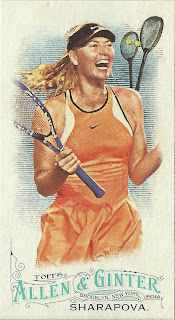 I don't mind having this card, even though she is suspended.  I enjoy watching tennis every once in a great while mostly because I have so much respect for the players and what they can do.  If you combine the two, tennis might be the most physically and technically demanding sport out there. 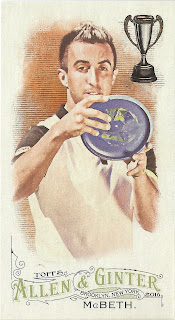 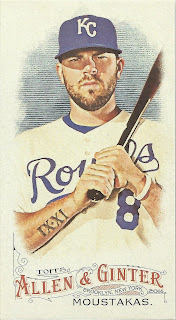 Onward to other minis says I!  More rare minis!  Next up in that list are these "new" Brooklyn back minis.  These used to be red backs, or Bazooka backs, or... I don't know.  There's been a lot of different names for these. 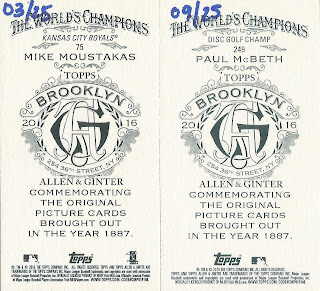 These now have the word "Brooklyn" on the back of them, so we must call them Brooklyn backs.  Whatever.  I rarely keep these unless I pull a Brave or someone I'm really interested in.  I got a Moose and a guy who makes a living by throwing a Frisbee around.  On a much happier note, these minis have numbers... many of them. 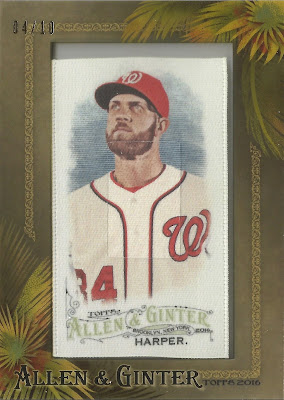 Next in line is the card that you've already seen.  I only got one cloth mini out of the case and it was a doozy.  Bryce Harper staring out into space with that ever confident look on his face.  This one is staying right here... at least for a while.

Next would be the metal minis numbered to 3.  I have never opened a metal mini, and this case did not yield any either. 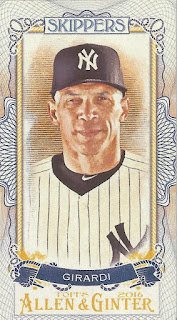 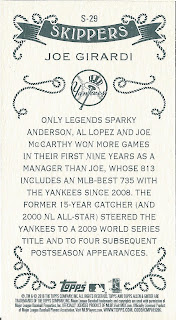 A quick break in the action to highlight the other rare mini that I plan on keeping.  This is a case hit that is part of a 30 card insert set that is going to end up hitting my wallet REAL hard.  While these minis are still case hits like years past, they are 3X harder to get because there are three times as many.  EBay prices for last years case hits could be seen around $6 if you tried really hard (normally more like $8).  This year, I haven't seen one go for under $10 (including shipping) and they are routinely going in the $12-$15 range.  Not impressed. We're talking about $300-350 for this set.  BOOOOOOO. 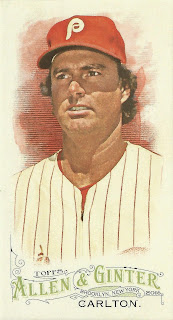 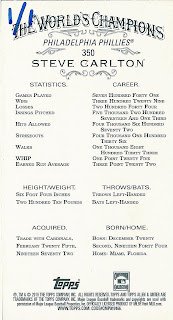 I did get a glossy mini of Steve Carlton!  I have no interest in keeping it.  It'll probably end up on the eBay eventually, if I don't get anyone really coming after it hard.  I should probably be responsible and re-coup at least a little of my case cost.
Posted by Bubba at 6:21 PM