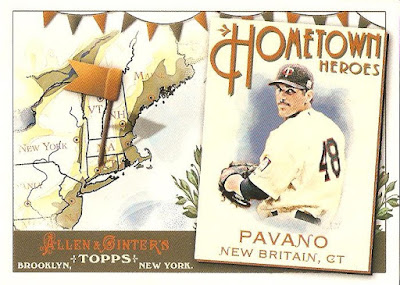 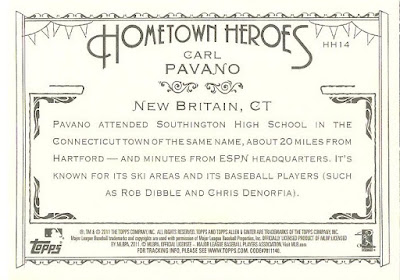 I wouldn't say that this is my favorite card of this set, but it is the only player in the set that grew up in Connecticut.  Pavano apparently went to Southington High School which is a school I commonly visit to umpire other high schoolers.  Every now and then I think about this sort of thing while umpiring.  Will any of these players ever make it??? Not that Pavano really "made it" as he struggled constantly at the highest level.

As attested by this particular set, Connecticut is not exactly the breeding ground for future Major Leaguers.  I think a lot of it has to do with the lack of old-school work ethic up here, but it's also probably because of funding, family support, and general lack of interest in the sport.  Connecticut has become a cesspool individual living, grinding the 9-5 and leaving little time for those things that aren't strictly work or strictly relaxing.

Notes and Comments:
The set itself is not one I ever paid much attention to.  Because it showed up in nearly every pack, it was no better than a base card to me.  In addition, the design doesn't exactly catch one's eye.

The biggest problem with the set is that it is in many ways a copy-cat of the 2008 Allen & Ginter US States set.  It only features players born and raised in the US so it really narrows which stars can be shown off, and that's generally what people are looking for in a baseball-only insert set... star power.  Carl Pavano is a perfect example of a card that almost certainly wouldn't have made the cut of normal 100-card insert set with no limitations.

Digging into the design, I think the US map displayed on all the cards is somewhat cheesy.  In all honesty, if I had to design a US state based set I'm really not sure what I'd do.  The task seems extremely daunting and I think it's telling that Allen & Ginter failed miserably at it twice.

I do enjoy the card backs and I feel the horizontal orientation greatly helps in this case.  From the framed flavor text, to the pyramid based title text, everything seems to flow on this card back.  The only qualm I have with it is that the flavor text would get extra spacing to make it look better from a distance.  Here's an obvious example. 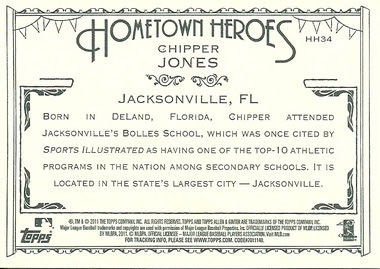 Arbitrary Rating (out of 100): 56 (Overall, still not going to get a great rating, but better than it's 2008 counterpart)
Click link above for complete up-to-date ratings

Extra Cards: Too many to list.  Check out my Ginter Trade Bait if you're looking for specific ones!
Posted by Bubba at 12:00 PM