This past weekend I was able to take some time off of work and spend some time with friends up in Boston. A while back I had received Red Sox - Braves tickets for my birthday for the game this past Sunday. Living in Connecticut obviously puts me pretty far removed from my favorite baseball team, so I get pretty excited whenever the Braves meander on up to New England.

Heading into Sunday, the Braves had lost the first two games to the BoSox and needed some redemption. We happily got it on the backs of Mike Foltynewicz and Tyler Flowers. Weeks before the game, I found myself trying to project starting rotations to see if either of my favorite pitchers would be on the hill for the afternoon. Twas not to be, but I did end up seeing two of the hardest throwing starters in all of baseball which was pretty cool (Folty and Sale).

We hung around a while after the game and took this picture right before we left. I promise, the stadium felt pretty near capacity for most of the game. 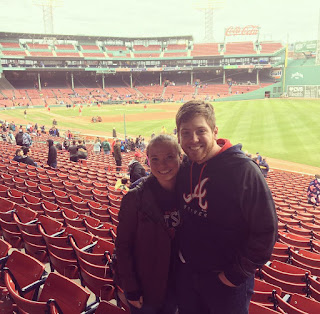 One of the other pitchers I was looking forward to possibly seeing in action was former Braves closer Craig Kimbrel. I suppose its a good thing that I didn't see him pitch, as it meant that the Braves had a nice comfortable lead. I always enjoyed watch Kimbrel pitch while he was in Atlanta, and I was quite sad when he left us four years ago.  After he left, I actually thought we got a bargain letting him go as he immediately seemed to regress and posted pretty average numbers with San Diego and his first year with Boston.  However, last year Kimbrel took off again posting a 1.43 ERA over 69 innings.

In fact, just the other week Kimbrel became the fastest pitcher to reach 300 saves, in terms of appearances, save opportunities, and age, distinctions formerly belonging to Mariano Rivera (537 G), Joe Nathan (335 SVO), and Francisco Rodriguez (31 years old).  That's some pretty sweet company he just beat out.

It's only fitting that I get to show off this card, courtesy Chris of Nachos Grande. 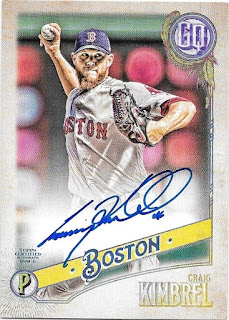 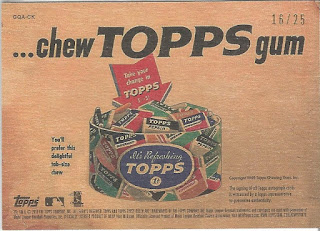 Chris also included a few other cards from his dual box break of this years Gypsy Queen. I'd say that it's probably a slight improvement in design from years past, but the set still doesn't seem to have found its 'niche' yet. The entire set could disappear and I don't think it would be missed by many collectors out there. 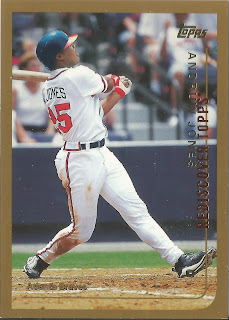 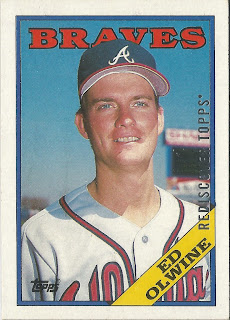 The rest of these cards are actually from a previous care package Chris had sent me from the remains of his 2017 Allen & Ginter set build. 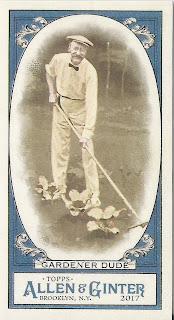 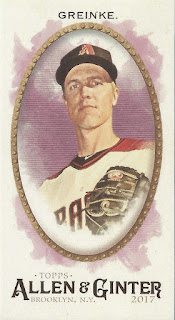 Quite a few minis were included along with this very blue Gardener Dude that you simply have to adore.  Old dude gardening in a white suit seems... questionable at best.

More minis of a bunch of stars! 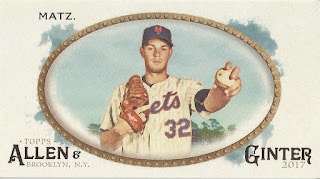 Some obnoxious horizontal minis that only fit one per line on the blog and don't like binders. 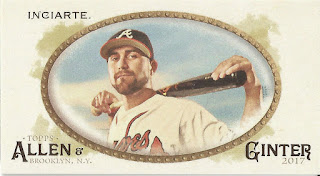 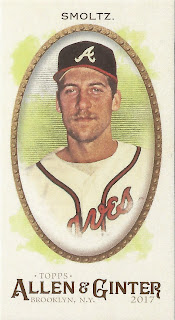 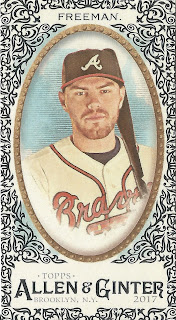 ...and lastly a trio of Braves minis not for the set-build but rather for the PC.  All appreciated!

Chris also has recently had some awesome news in the past week as his family just got one person bigger with the recent announcement of a newborn! Congrats Chris and thanks so much for all these cards!
Posted by Bubba at 10:23 AM