A while ago I busted a single pack of 2009 Upper Deck Goudey.  It's been sitting next to my scanner for months now and I'm just now getting around to writing about it.  Let's take a quick peek. 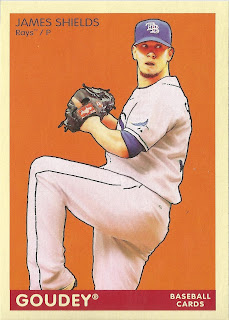 Each box of 2009 Upper Deck Goudey contained 18 packs with 8 cards per pack.  This was really my first real look at this product as I wasn't collecting until after Upper Deck lost its license in 2010.  I think I may have gotten one or two of these cards as throw-ins in a trade package, but I don't recall any with this exact design so they were probably from a different year.

The design really doesn't do it for me.  While I will say these cards look better in-hand than on the scanner bed, the background colors really are a bit vomit inducing. 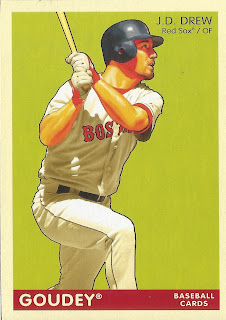 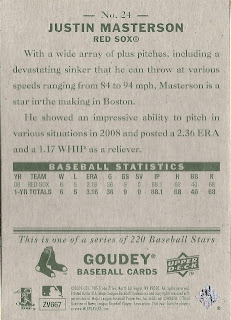 The art styling here seems a bit odd to me as well.  There are certain cards like the Utley above that look completely hand-drawn, while others, like this Drew here, seem to be a photograph with a filter.  The change in detail level between cards confuses me.

I don't mind these card backs.  They're fairly simple and get across what they need to, while choosing to feature (and highlight) a short write-up on each player.  They're legible and fairly informative. 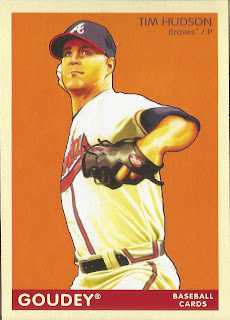 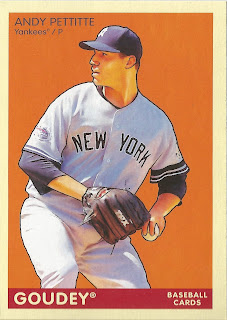 I did get a Brave from the pack which was nice.  Not really a great looking card though.  I always hated Andy Pettitte growing up.  He pitched a decent number of games against the Braves in the World Series and seemed to always get out of hot water even though we hit him fairly well.  Super frustrating. 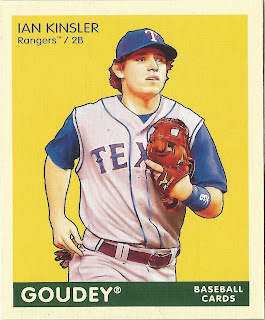 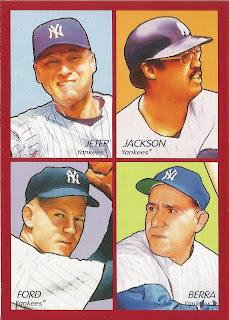 This Kinsler card is weird... almost square.  It's like they cut an inch off the top of a normal baseball card.  Small boy instead of tall boy?  In any case, I don't like them.  I'll stick to my tobacco cards.  This last card featuring Yankee greats is pretty darn cool.  The red frame makes it stand out a bit too, and even though there still exists some of that strange background coloring, there's much less of it so it's almost a decent card!