Vacations are great.  They let you escape from doldrums of work, weather, and people that you see far too often for your own good.  Roughly two weeks ago, I went on a vacation of my own to the "Happiest Place on Earth."  Since I get park admission for free and get extremely good discounts on food and lodging, I try to make my way down to Florida at least once a year (usually during the winter) and just relax.

This year, I went with my girlfriend, my best friend from high school, and his girlfriend.  Despite it being a bit more chilly than we expected down there, we had a blast staying at the Beach Club Resort.  The resort's main draw for us was having the ability to basically walk into the back entrance of Epcot as often as we'd like.

While not necessarily my favorite part of the trip, the one thing that really sticks out to me was playing mini-golf at a place called Fantasia Gardens.  I play a decent amount of real golf on a very casual level and this course enthralled me.  The course legitimately reminded me of an actual golf course complete with hazards including water, deep rough, and sand pits without the sand (so basically just giant pits).  Holes were also far longer than your 'typical' mini-golf course with the longest being around 110 feet.  You pretty much could not possibly get the ball near the hole on some of the longer holes and had no choice except to "lay up."  It was a blast to play and took well over an hour to play all 18 holes. 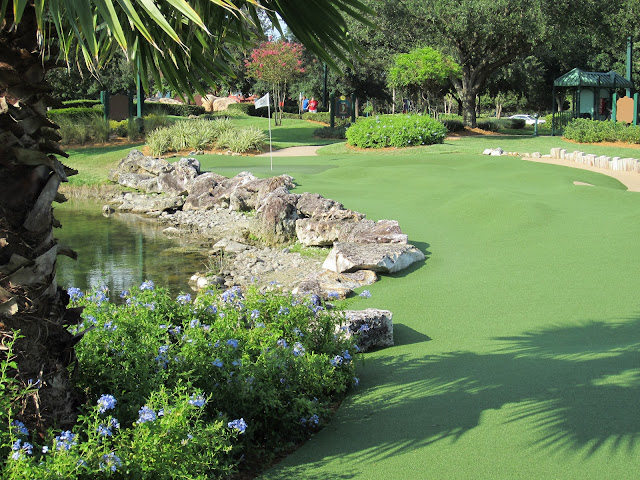 My loot from the trip included:


We had a blast and I got to experience a whole host of new restaurants, my favorite of which was the Yachtsman Steakhouse.  It was right next to where we were staying for the week; our waiter was upbeat, and the steaks were phenomenal.

So that's where I've been and it took me a while to catch up on all of your blogs, but I've finally done it and can get back to posting myself!
Posted by Bubba at 3:01 PM

Email ThisBlogThis!Share to TwitterShare to FacebookShare to Pinterest
Labels: not strictly about baseball cards, Story Time!