Over my years of collecting, I have never opened more than a few packs here and there of Topps Heritage.  I don’t really have a particular hatred for the set; in fact, I would say that I tend to enjoy the set more often than not year in and year out.  My real reason for not typically jumping on this product is my set collector’s mindset.  If I ever bought more than a handful of packs and I liked the design, then I knew I would have to break down and try and complete the entire thing.

Topps Heritage does not easily lend itself to completion.  Sitting at a whopping 75 short prints with pack odds of 1:3 it would take breaking 10 hobby boxes to even get to the required number of short prints to complete the set (forget duplicates).  That’s far more boxes than I care to break of a product that pretty much only features base cards.

A few weeks ago, I was shopping at Target.  I was actually looking for stamps (which they inexplicably do not sell) and deodorant (which… thankfully, they do).  I then proceeded to saunter down the card aisle to see if I could find any bargains.  Apart from some “discounted” Panini Triple Play, there were no bargains to be had.  Heritage had recently come out however, so I decided to fill my quota for it and picked up one of those retail jumbo packs. 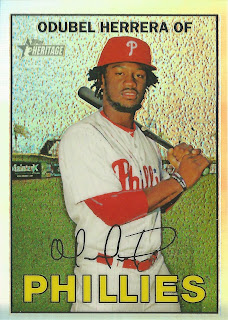 The only halfway interesting card to come out of the pack was this shiny card numbered out of 567 which was a pleasant surprise.  I did quite enjoy the base cards, which I suppose is more of a hat tip to 1967 Topps than it is to modern day Topps.  I’m not going to analyze the differences and mistakes made between the two sets, because I am completely unqualified to do that considering I own zero cards* from 1967.


Regardless of the common complaint of grainy photos, I executively decided (yes, I’m my own executive.  It’s a fun way to think of oneself.) that making a subsequent purchase of these cards was allowed.

A full blaster this time! 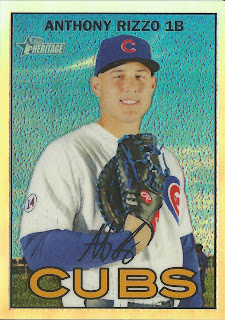 Two short prints and another shiny card later, I had a stack of stack of 2016 Topps Heritage sitting on my scanner waiting patiently for me to do something with it.

Before continuing, let me tell you another one of my quirks.  I would consider myself a generally organized person.  I'm certainly not obsessive, but I do like to be able to find things (especially cards) when I go looking for them.  When I purchase any kind of brand new baseball card my typical process is as follows:


Well, these Heritage cards simply continued to sit on my desk, unsorted, waiting to be scanned.  Step 3 simply had not yet begun.

Getting myself in trouble...

This past Tuesday I went into work at the LCS that I occasionally help out at.  I've mentioned this before, but basically I work about 4 hours a week there and use the money I make to purchase cards.  In general, I try not to spend more on this hobby than what I make there.  For the most part, this arrangement works out fairly well for me.  I always order my case of Allen & Ginter from this shop and work it off over a couple of months, and will then have money to spare on some other fun products.

I went into work the other day to find a check waiting for me.  I was confused, as I almost never get checks over the top as I can always simply put money towards my next case of Allen & Ginter.  I mentioned this to the owner, and he told me that I had already paid off my next case (yes... the one coming out later this year) and that the check was what he owed me above and beyond the case!  Naturally, I immediately told him to rip the check up... but what to buy?  Gypsy Queen was nixed... I hate that product.  So was Series 1 for similar reasons.  Bowman is still a couple weeks away at this
point which I probably would have gotten because... reasons.  So pretty much the only options were old product or 2016 Heritage.  I'm sure you can guess what I chose. 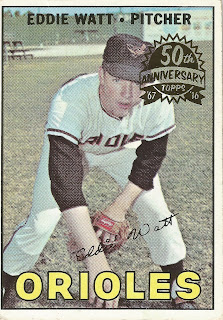 Apparently 1967 was calling to me.  Oh, and that comment above about not owning a 1967 card... well here's my first, even if it is mutilated by a giant stamp.

I have never opened a box of Heritage before and never really realized how "low-end" it really is.  There are packs of cards that are simply base and that's it... no short print, no insert, no parallel, no autograph or memorabilia, just plain old base cards.  There's something incredibly old-school about this as I'd imagine this would be what one experienced if one opened a pack back in 1967.  I come away from a pack like that and somehow don't feel disappointed in the slightest.  In fact, it makes me focus on the base cards more than I normally would otherwise. 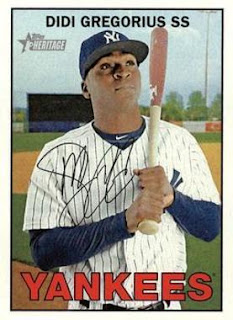 Here we have a typical base card featuring Didi Gregorius.  Nothing special... no error or color swap or missing 'i' in the signature.  Just a base card.  Many of the base cards are like this.  Clearly posed close-up photos and yet the player is making a conscious effort to not look directly at the camera.  I very much like this little photography quirk.  You still get your promised close-up shot of the player and yet the poses feel more "natural" and less over-bearing and set-up.  All the cards feature a facsimile signature (some with dotted 'i's' and some without), and a colorful TEAM association on the bottom of the card.

One other thing to note is the background.  It exists.  There's life happening back there (well... at least Spring Training baseball at some practice facility) and this is true for the non-posed cards as well that feature action. 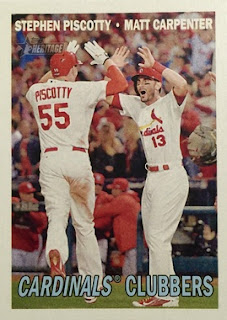 The dugout and managers exist... well, mostly... at least better than Topps Flagship.  Instead of making the background grainy, Topps instead chose the route of making the entire card a bit grainy.  The images in general are not sharp at all in most cases simply due to some kind of filter that Topps decided to use to make the images look older.  It's a bit like last years Allen & Ginter set actually... just done a tad more tastefully with quite a few less players suffering the chicken pox effect.

But don't you worry you modern collector's out there.  I pulled things other than "just your typical base cards." 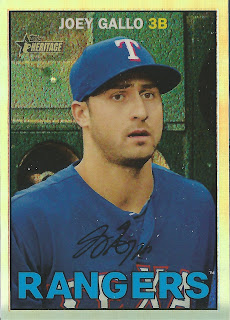 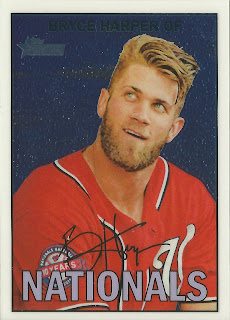 Two shinny cards from the box.  The Gallo is /567 and the Harper /999.  The Harper makes me incredibly happy. 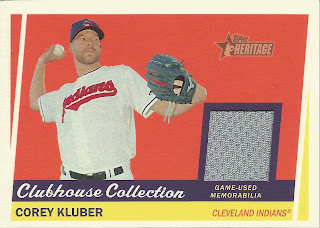 My promised hit from the box comes in the form of a Corey Kluber relic.  Nothing overly special I suppose, but certainly nothing to sneeze at either. 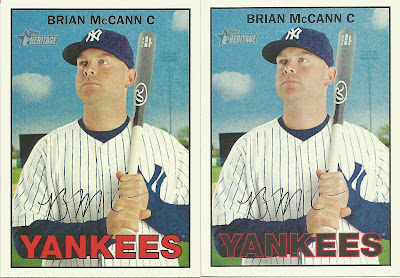 The box also happened to have two variations in it.  The only way I found these was when I went sorting through the box and happened to have doubles of exactly these two cards.  If found it strange, so I flipped the cards over and saw that they were different.  Hooray!  Problem solved!  A variation!  The McCann is apparently a "color swap" 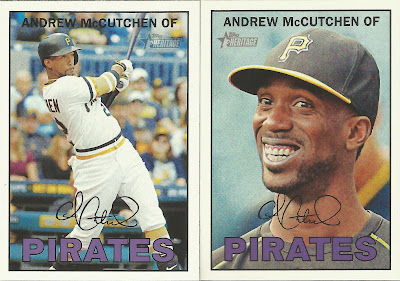 ...and this super cool Cutch is an "action variation."

I like the box so much that I had to proceed to step 4 of my process.  I've decided to chase this year's base set (and maybe inserts).  I actually got 2 hobby boxes of this stuff, so I'm still working on a want list (probably gonna be a bunch of SP's).  I'll be sure to try and get the second box up ASAP.  If I thought this one was good, I was certainly in for a treat opening box #2.  One of the most fun breaks I've ever had.
Posted by Bubba at 6:55 PM