I Was Sent Braves That Aren't Actually Braves...

I was introduced to Jeff and his blog 2 X 3 Heroes when he won one of my Allen & Ginter contests a few months ago.  Perusing his blog lead me to a page called Club PWE which I signed up for.  Apparently Jeff likes sending out random cards.  I like getting random cards.  It's a good fit.

I got 8 Braves cards in my envelope.  5 made the cut for the team binder (the other 3 I either already had, or were so hideous that I wouldn't want to look upon them).  I found it funny that of the 5 cards, none of the players featured were on the Braves last year (3 of the 5 were on an active roster last year, and a 4th had a minor league contract).  Here's the 5. 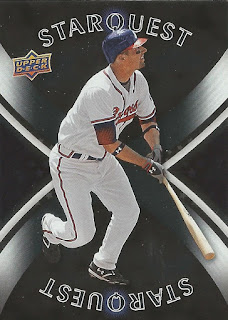 I don't have very many cards of Mr. Jeff Francoeur in a Brave uniform even though he was with us for almost 5 years.  His best years (even to this day) were as a Brave and he did his best to defy the sophomore slump by belting a career high 29 HR's in 2006.  This card is a black version of 2008 UD Starquest insert set.  Don't ask me how many different parallels there are of this card.  There are many... that's all I know. 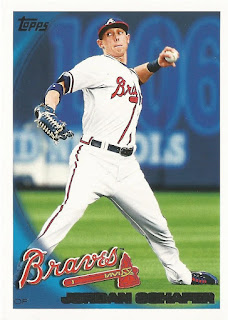 2010 Topps Jordan Schafer.  This guy always irked me while he was with Atlanta.  He got a ton of hype, but never even came close to realizing it.  Apparently he had a decent year last year???  Who would've know?  He's with the Twins now, but I'm not even sure if he's still on their 40-man.  Oh well, still makes the binder because I've got to have at least one card of him.  He was always super fast and a pretty good defender and this showcases that (so its a winner for now).  If I find a decent card of Schafer stealing second though, this one will probably get cut. 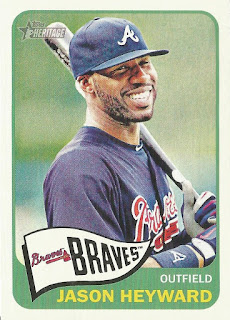 We interrupt this program to bring you a card of a player who is probably still most often associated with the Braves... even though he's a dirty Redbird.  What can I say?  I like pitching.  I still like the Shelby Miller trade and I think it's been the biggest win for the Braves in the past year or two, regardless of what happens to Miller now (there are some talks of him getting traded away too). 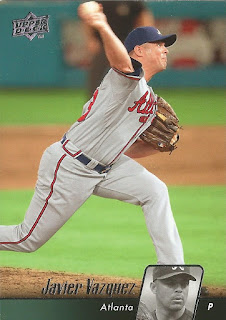 The differences are startling.  All of those numbers are career bests for Vazquez.  He carried that team on his back in 09 and deservedly got 4th in the Cy Young balloting.  He absolutely gets a spot in the binder (if not more than one). 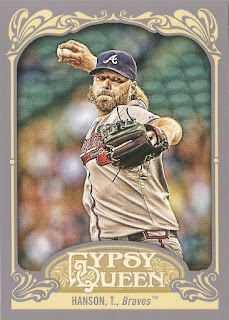 Another Bravo who is no longer with us... and another player who probably had his prime in ATL.  I was really hoping Tommy would go somewhere, as his effortless, yet jerky delivery was extremely fun to watch.  Unfortunately, Hanson passed away just over a week ago now with reports indicating catastrophic organ failure.  My thoughts and prayers are with his family and teammates.

Thanks Jeff for the Club PWE package!
Posted by Bubba at 9:19 AM