Bringing it Back Nice and Slow PWE Style

I received a surprise PWE from Kerry of Cards on Cards, oh probably like 3 weeks ago now?  It shouldn't have really been a surprise though as he mentioned he was doing so in a post.  Either I forgot about it or skimmed over it, because I certainly wasn't expecting it. 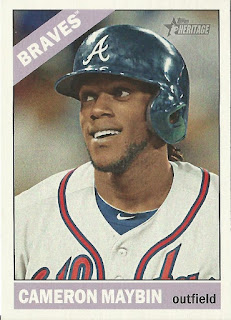 The envelope was true PWE style.  None of this modern "stuff as many cards into a third of a 9-pocket page because shipping is expensive."  No, this was your classic 3 cards in a penny sleeve.  When I opened the envelope, Cameron Maybin was on top in Heritage fashion. 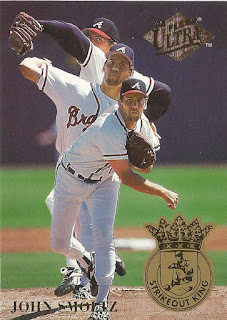 I flipped the envelope over to see John Smoltz staring me down and looking to strike me out.  My dad was actually next to me when I opened this and he even commented on the card and thought it was pretty interesting.  The back of the card is a pretty ugly yellow though, so I didn't scan it to save your eyeballs.

In general, I think I like these motion capture shots.  I actually think it's pretty cool when done well.  I've seen some really awesome cards that use this technique for players sliding into second base.  Pitching works decently well as seen above.  Capturing a player swinging a bat can be a struggle though, as most hitters (at least the ones with good form) swing in one plane, so you wouldn't actually see much difference between the pictures.

I was a bit confused after seeing the first two cards.  Why would someone send me a PWE with two random base cards in it.  I didn't have these, so I'm not complaining (and they'll go straight into the Braves and Smoltzy binders), but it wasn't like these were on my want list or I was specifically looking for them. 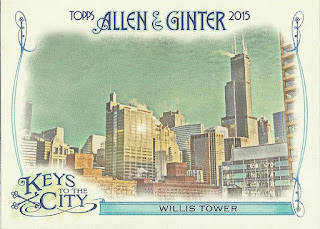 There was one more card between the two though!  One of this year's retail only full-sized inserts!  Woo!!!  Number 4 is off my list now and we're down to three cards remaining to find!  I'll get them someday.

Thanks for the surprise PWE Kerry!  Much appreciated!
Posted by Bubba at 11:56 AM