Got antsy... needed to break something...

This is my offseason as far as baseball cards go.  While everyone else seems to be opening Topps flagship, I generally refuse to as I've never exactly been thrilled with the design, nor do I enjoy putting sets together that can just be purchased outright via a factory set.  I must say that this year I was VERY tempted to start breaking some.  I absolutely love this year's design.  Keeping in mind that I haven't touched vintage cards, this is easily the best design that Topps has created in [recent memory].  Even still, I told myself I would have ended up spending way too much money on fairly worthless cards if I did dive into the set.  Perhaps I'll buy this year's factory set for the first time.

In any case, Allen & Ginter typically releases mid-summer (late July to early August).  I get a case and usually end up buying random retail packs/boxes (mostly because there are different inserts in retail) until around Christmastime.  By then, I have a hard time justifying getting more as even minis start doubling up.  January - August then becomes my baseball offseason.  I typically end up filling this card collecting gap with two things: Bowman and Magic the Gathering.

Bowman has not made its way to 2015 quite yet so that was off the table.  I suppose I could have picked up some 2014 Bowman because I didn't get any of that last year.  I liked the Magic sets so much (Theros, Born of the Gods, and Journey Into Nyx were all really fun sets and I bought a box of each).  This year, the Magic sets (outside of Khans which was released way back in September) have been less than exciting, and while I've bought packs here and there, I haven't bought a box, thus the pack opening void I've recently experienced.  NEED TO OPEN SOMETHING!

I decided to go super cheap and take a flyer on something.  I gave EBay $35 (including shipping!) and they graciously sent me a sealed hobby box of 2007 Topps Chrome.  I had done literally zero research on what could be in this box... but com'mon, $35 for two guaranteed autos (even if they are no namers) and a bunch of shiny chrome cards?  Deal.  Here's what I got: 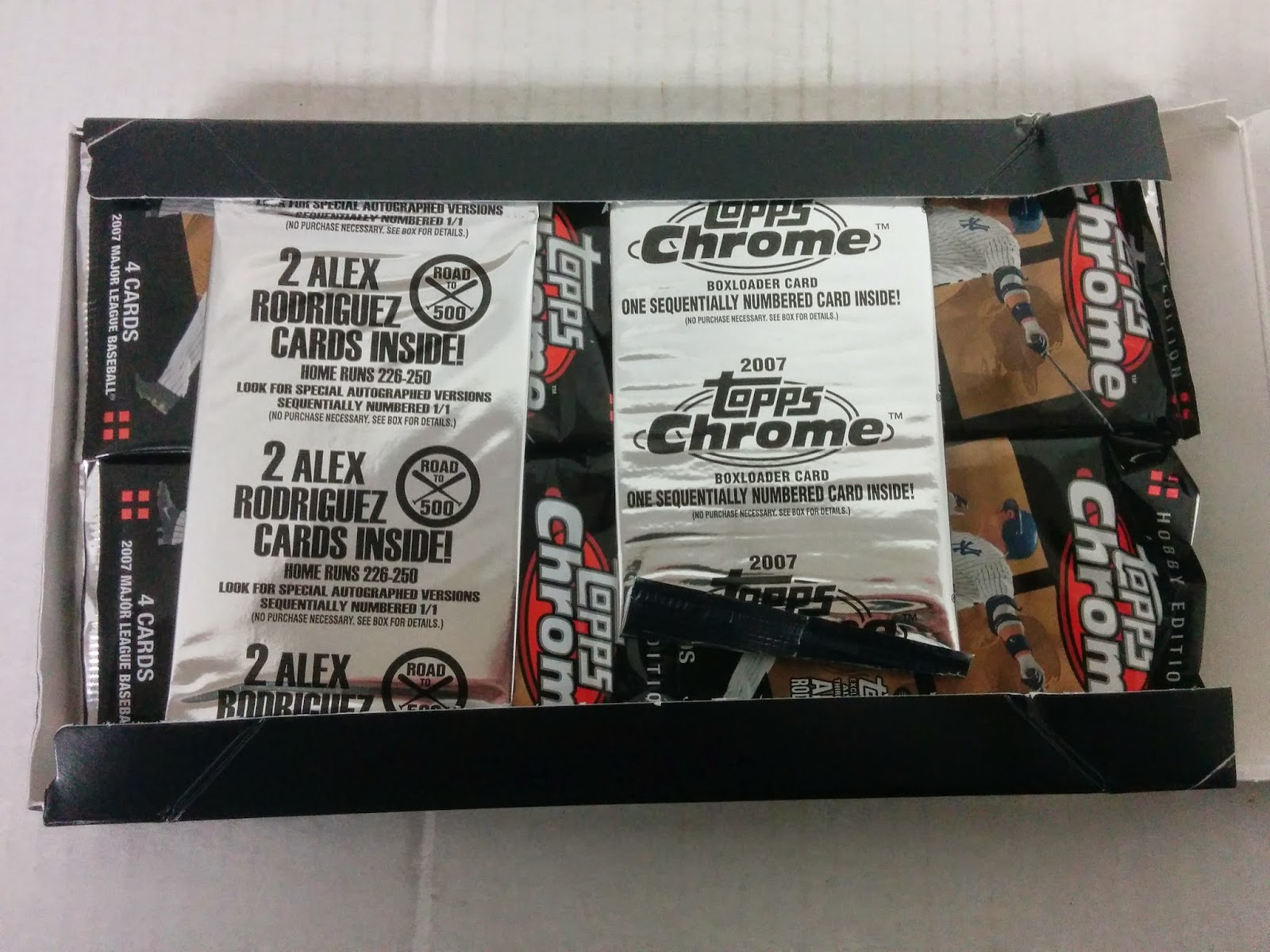 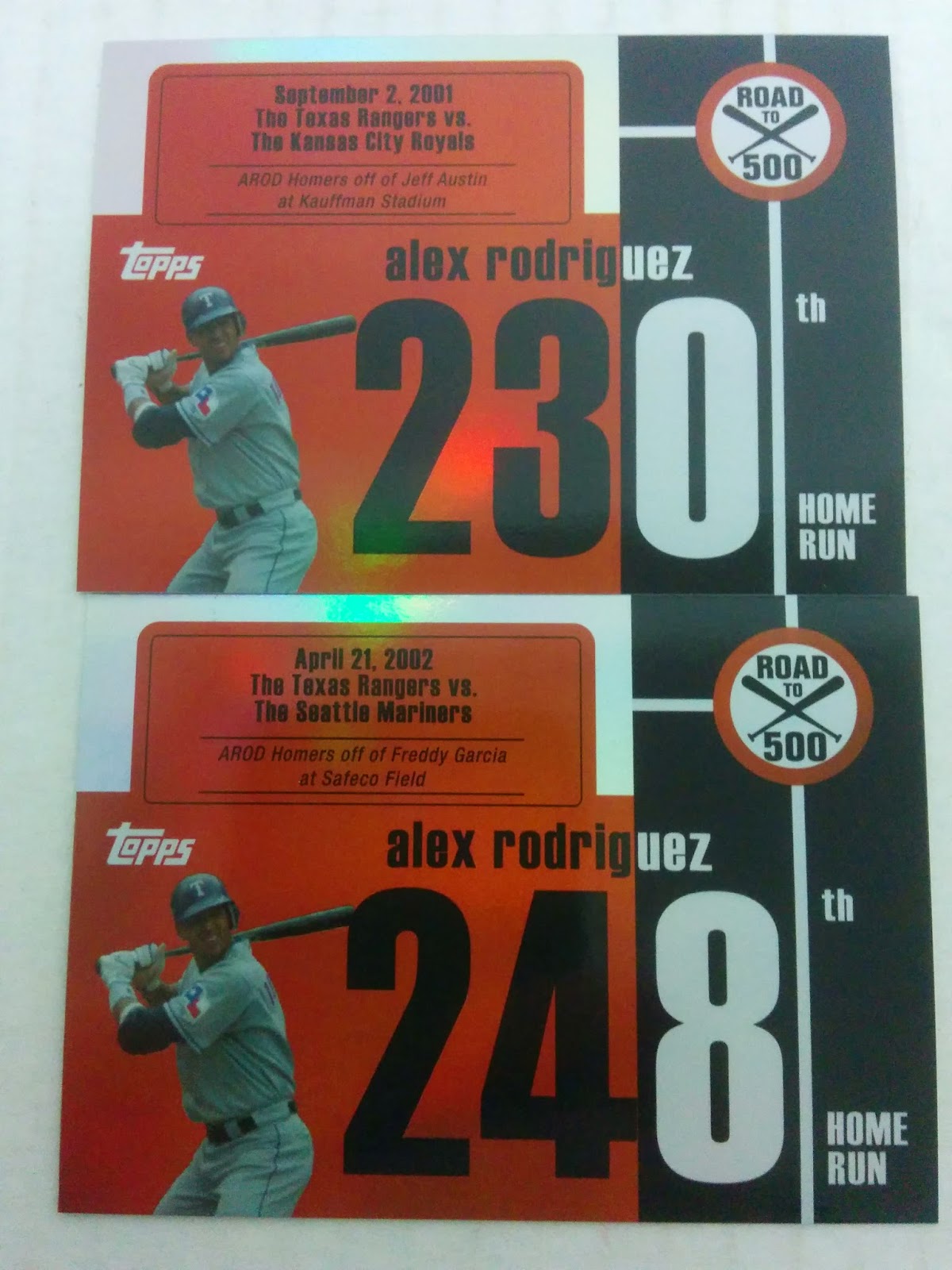 BORING...  I remember these.  I'm sure I have a bunch of these hanging around from collecting in 2007.  Such a silly idea.  Topps even threw these into 2007 Allen & Ginter packs and they looked completely out of place.  Not to mention that, outside of the huge number, every card front is EXACTLY the same.  Completely unoriginal.  God bless those that tried to complete this set... 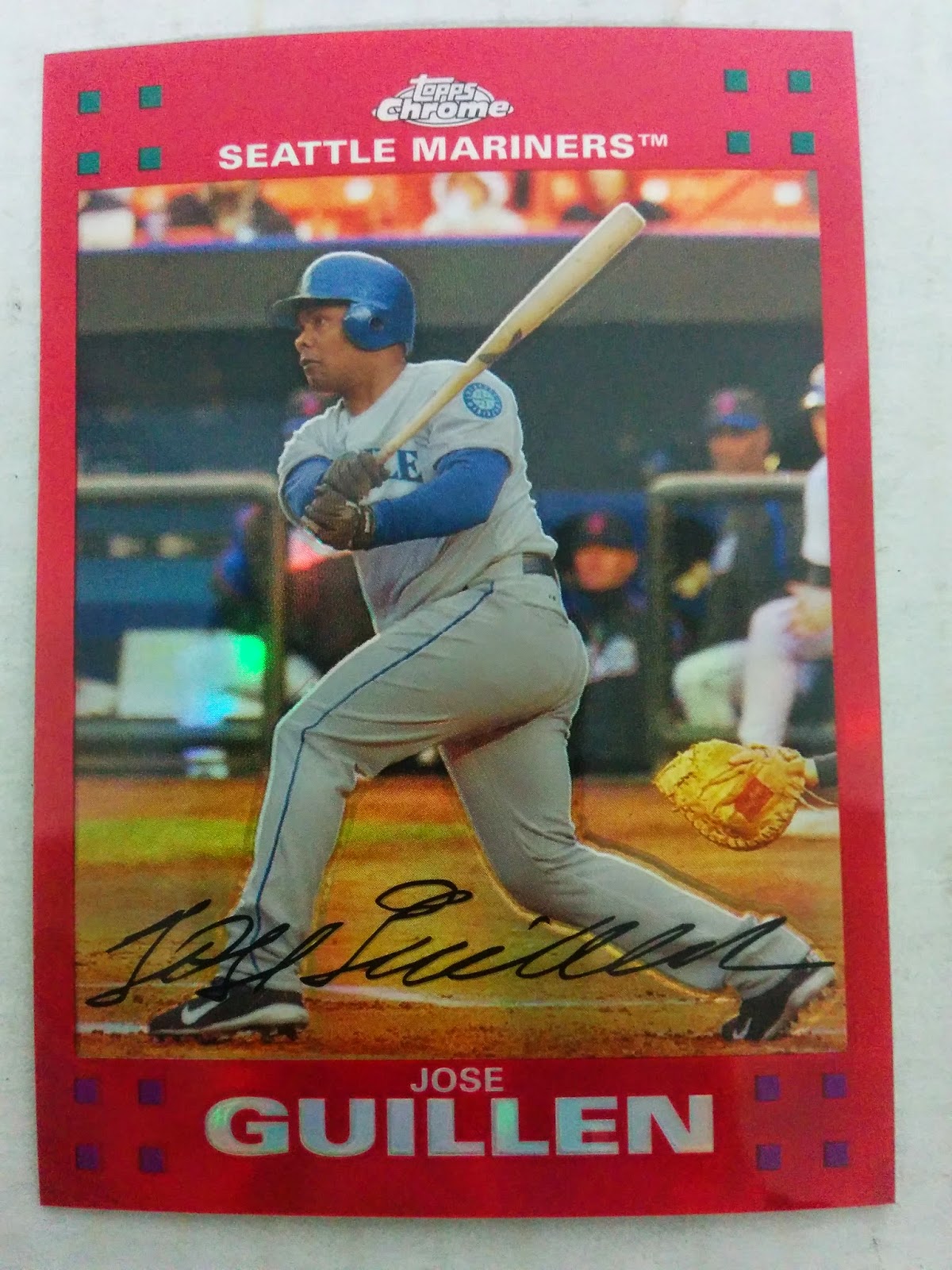 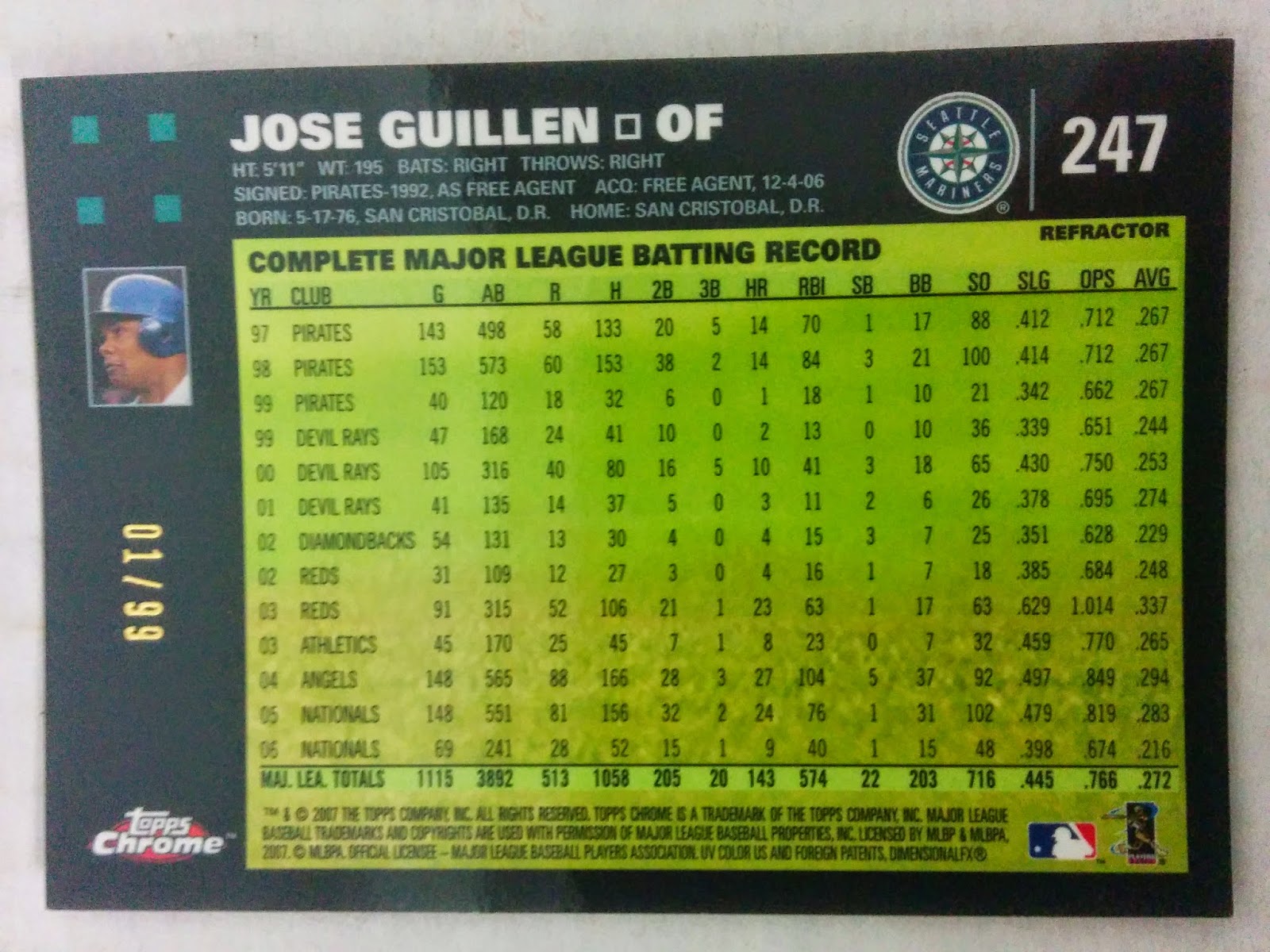 The second box topper yielded some Chrome color.  A pink? refractor of Jose Guillen numbered 1/99.  Not going to complain... at least its someone I've heard of, even if it was because he was associated with PEDs.  After opening the rest of the box (and as you'll see below), I wondered if this was commonly the only significant color that came in the box (perhaps why the boxes are so cheap). 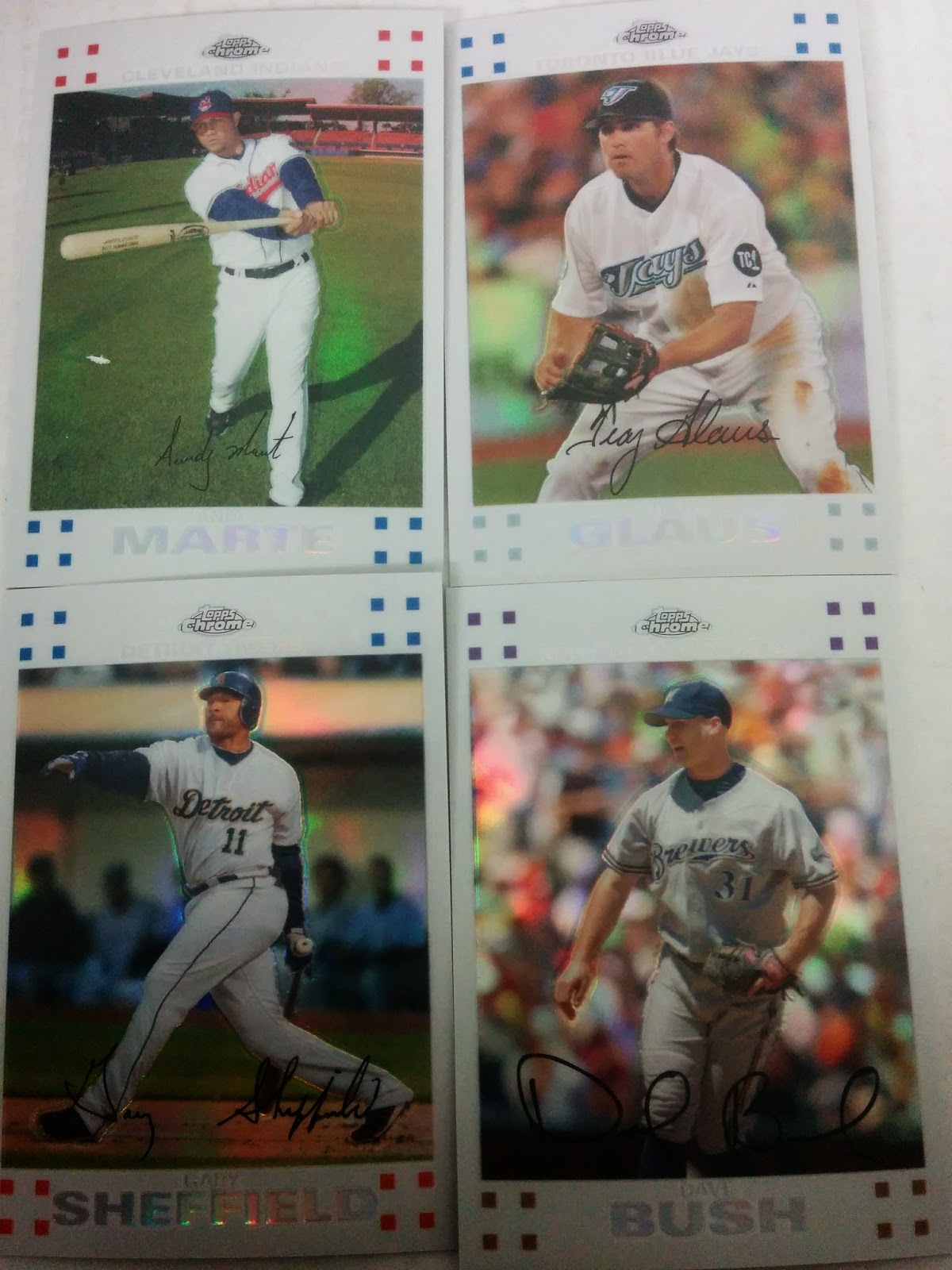 Here is the only other color I received in the entire box.  These are white refractors numbered to 660.  Nobody super special (I suppose Sheffield is kinda cool, but he's not in a Braves uniform so I couldn't care less). 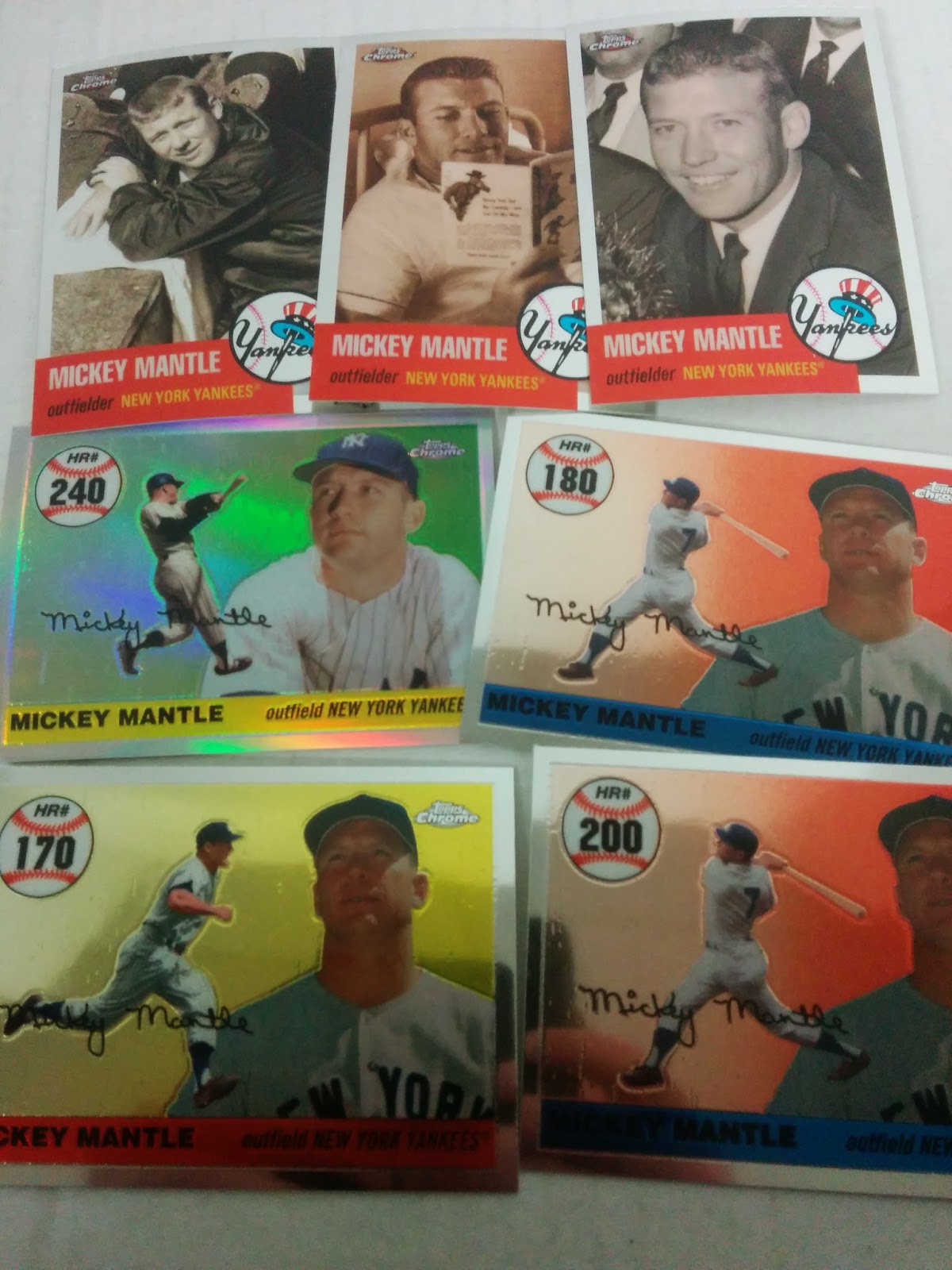 One of the main selling points of this set was the fact that "every pack contains an insert or parallel!"  I like color (doesn't everyone?) and I received four white refractors and 8 regular refractors (they were all terrible so I didn't even bother taking a picture).  The other 12 packs contained inserts of some variety.  Typically I get excited about inserts, and perhaps this is because I'm spoiled by the eccentric and wonderful Allen & Ginter inserts.  However, these inserts left much to be desired.  The first seven all had to deal with Mickey Mantle.  Why?  This is 2007 Topps Chrome (what I would call a "modern" set with lots of shiny things), why are we putting old-timers in here and dedicating TWO full insert sets to him?!?!?!

The top insert set pictured is that of the Mickey Mantle Story.  I'm okay with this set.  I feel like they could have put it in a different Topps product, but at least the pictures of Mantle are all different and sufficiently interesting.  Even still, I would never consider collecting the set as, not did I only get 3 out of 30 of the cards, but there are even more of these in other Topps products spilling over to the next year of Topps Chrome... WHYYYYY???  Stop this nonsense.  First A-Rod and all his homers, and now Mantle and his life spread over multiple products/years.

Oh, that's not enough??? How about an ugly insert set spread out over multiple years/products featuring cards that are nearly indistinguishable from one another and feature the EXACT SAME PLAYER!  So exciting.... that's those four Mantle cards on the bottom if you were wondering. 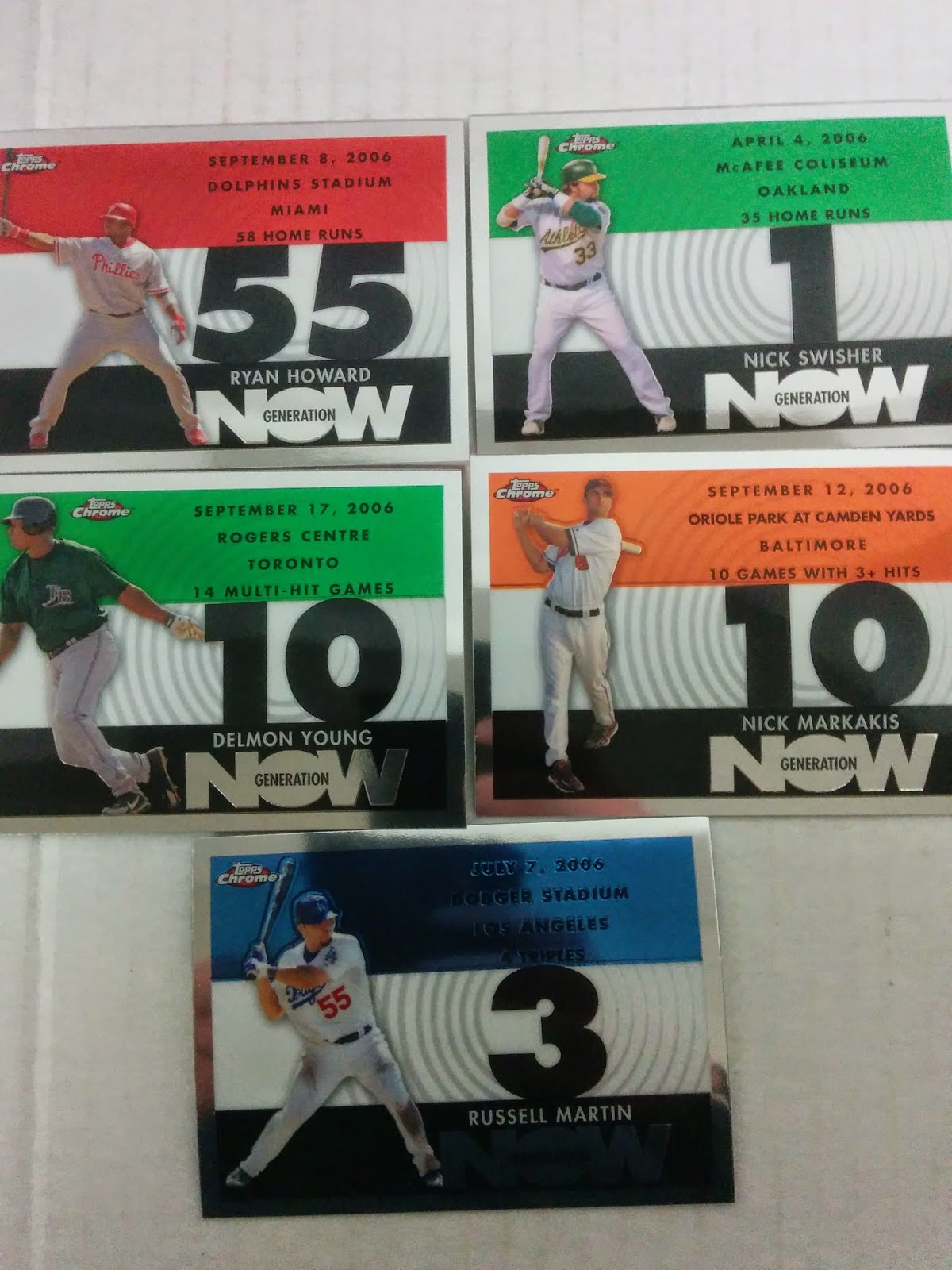 The last 5 inserts were Generation Now inserts.  Yet another insert set spread out over multiple products.  The design is pretty mediocre on top of that...  need I say more??? 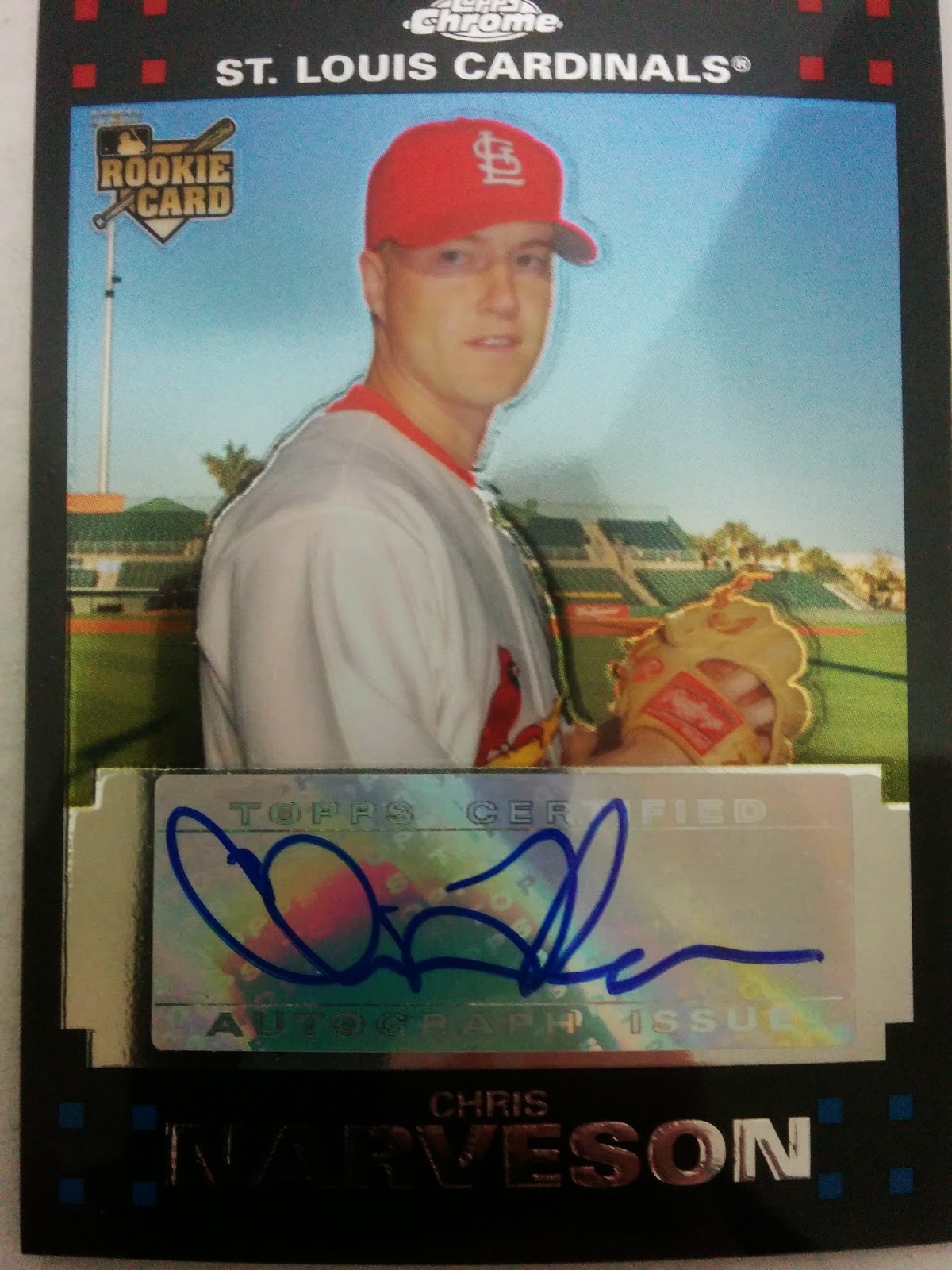 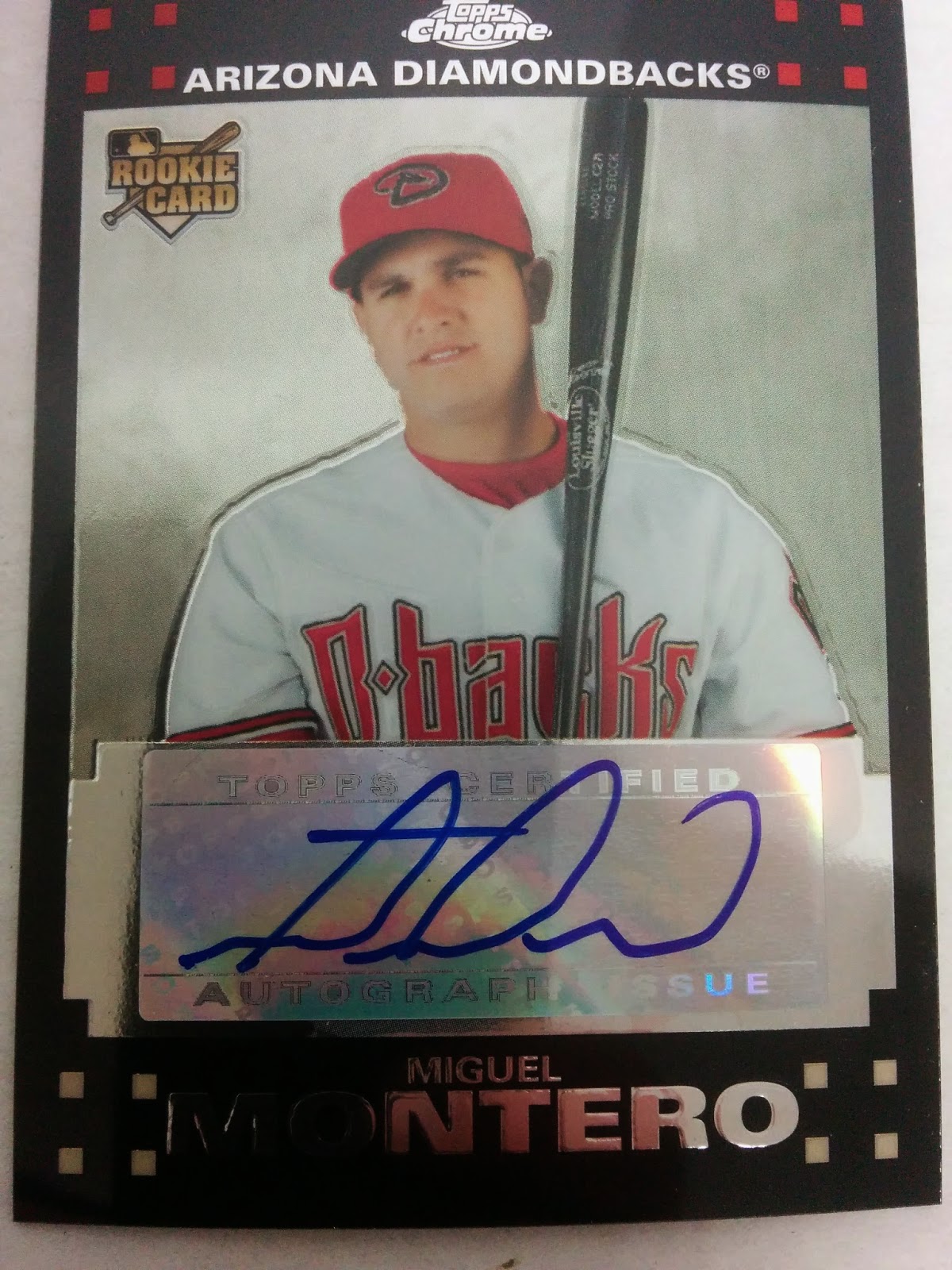 My two rookie autograph hits for the box.  Sorry for the dark pictures... that's Chris Narveson of the Cardinals who popped in and out of the majors from 06-13.  So at least it's someone who actually played for a little while which, looking at the auto list from this set, can't be said for about half the guys.  The second is Miguel Montero who is still playing!!! Hooray!  A decent hit.  Probably one of the top 4 autos of the set (and he's still got a bit more time to do more).  I'm quite happy with these two cards! 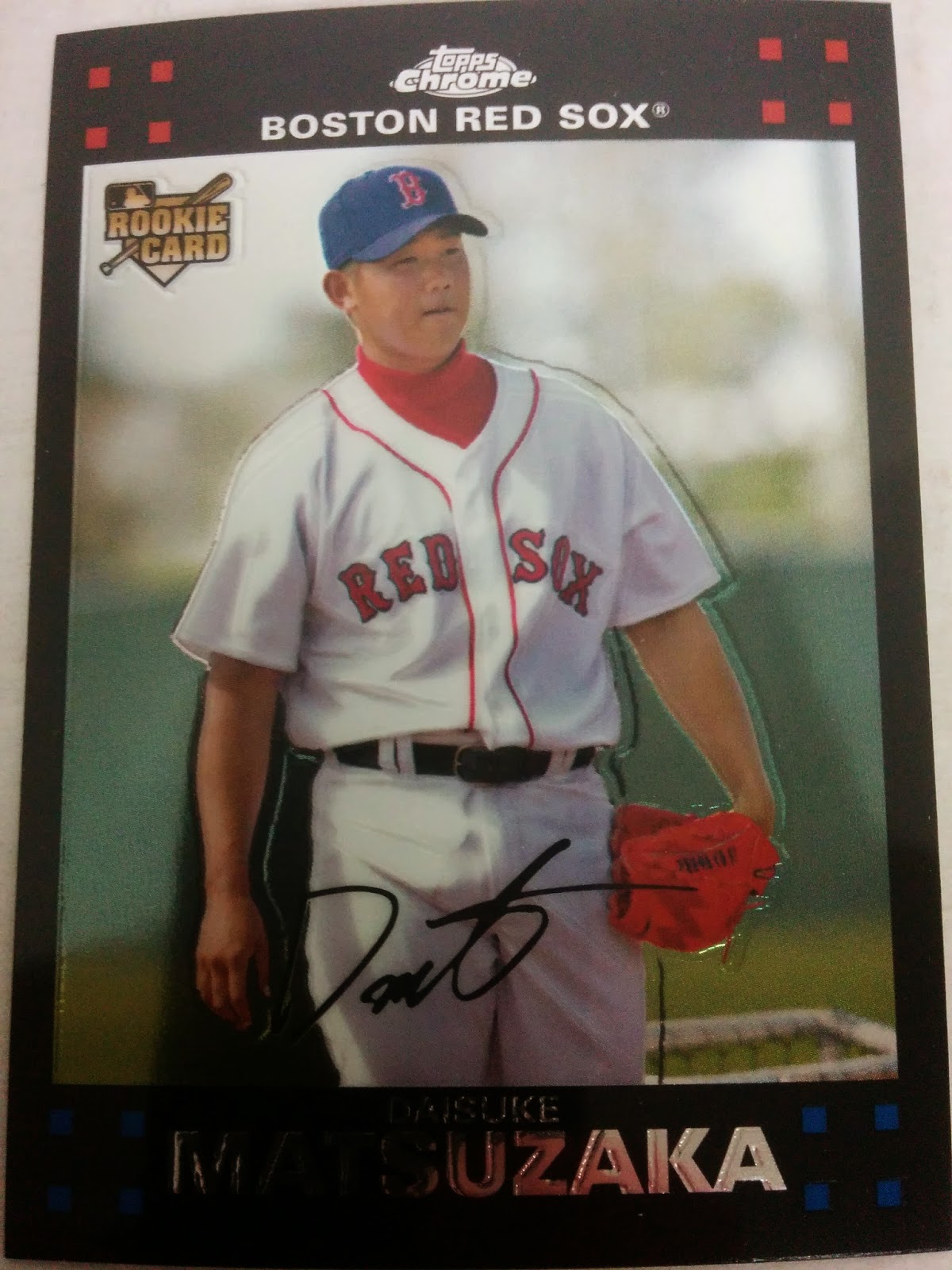 We didn't get too many base rookies from this box, but here's one of them.  This probably (read: definitely) used to be worth quite a bit more and was probably the most sought after card from the set.  Probably not so much anymore, but I still love it.  I loved watching Dice-K pitch in his two good years for the Red Sox and its unfortunate that he never quite got it back together.

All in all, this box was horrible.  There's definitely a reason it only sells for $40... there's simply nothing in it.  The base cards and inserts are not exciting at all, and any color seems to be quite rare.  My autos saved the box for me, but I would expect that this would absolutely not be the case on average.  Look at the auto list... its horrible.  Either way, I still enjoyed taking the time to open something new and different, so it was worth it to me (and who knows, maybe Montero will keep making All-Star teams).
Posted by Bubba at 10:34 AM